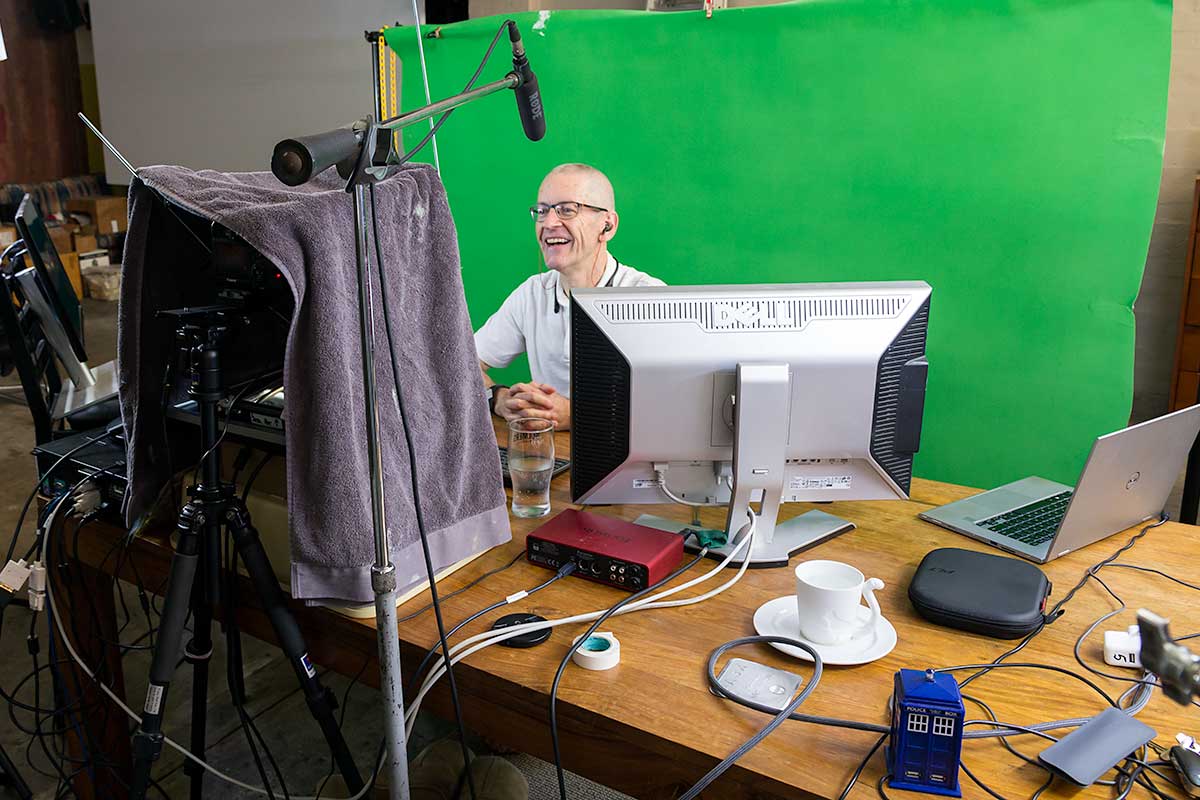 I recently co-hosted the May “Sydney UC” Meetup with fellow MVP Craig Chiffers. We normally run these at a conferencing centre in the middle of the Sydney CBD, but circumstances dictated this one be held virtually. Naturally it was going to be over Microsoft Teams.

You have two options for a Teams Meeting – a normal “in-tenant” meeting, or a Live Event.

Microsoft Teams Live Events are ideal for larger “town hall” style one-to-many meetings, more like a city council meeting or other “broadcast” event. The event is streamed via an Azure Content Delivery Network (CDN), and as such there’s a lag between your presentation and its reception that prevents real-time interaction with participants.

Sydney UC is a more interactive and collaborative environment, so we opted to run the event in the tenant. This gave our participants the ability to interact more naturally with the presenters, but perhaps at the expense of some control of the Meetup.

My partner Rocky had been experimenting with Open Broadcaster Software (aka OBS Studio) of late, and we thought the Meetup might be a good opportunity to see if we could add some more of a “pro” feel to the Meetup without compromising its intimacy, and address some other issues.

The Meetup presented one particular challenge.

For some of the sessions we required a “talking head” be the sole image served to the attendees. This is not unlike an education scenario where everyone should be able to see the teacher and not be distracted by the “Brady Bunch” grid showing the teacher and the other participants at the same time.

Yes, you can kinda do that today with the “pin” feature, but that has to be invoked by every attendee individually rather than being controlled from the presentation end.

The old maxim “content is king” rings true in Microsoft Teams: if no-one’s presenting content, you see the video wall of the participants, but if there’s content in the meeting, THAT’S the default view.

I turned this to my advantage, using OBS Studio to take my camera input and present it full-screen on a monitor, then “share” that content – that screen – into the meeting. The power of OBS then also let me add “person on content” and other effects – which is why I’m shown above sitting in front of a green-screen.

This “Lock the video spotlight” feature is officially on the “planned” list. If you agree there’s a need for it, please vote for it on the Microsoft Teams User Voice.

Here’s the setup we went with. It looks more complicated than it really is, don’t worry. Bear with me as I explain the components below. 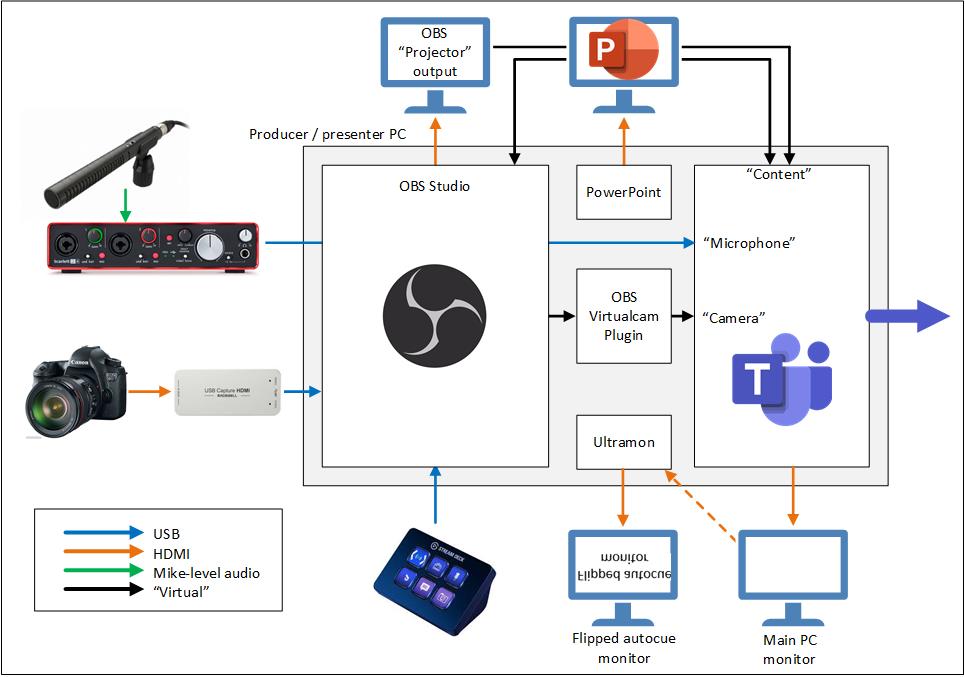 OBS Studio is an open source streaming and recording program that is effectively a television studio control room in an app. You create scenes using a variety of sources, such as webcams, images, screen captures and videos and switch between them in real time.

Inbuilt chromakey functionality even allows you to superimpose live camera images on other sources, provided you can “key” a background colour – usually green.

OBS Studio was originally created for gamers to live-stream their massively multiplayer online game (MMOG) experiences to platforms like Twitch, but has been embraced by the Microsoft Teams community of late for its pre-production features and ability to output directly to Microsoft Teams via a “virtual camera” plugin.

The OBS Virtualcam Plugin makes OBS’ output appear as a camera to your PC. It was this signal that became my “video camera” input into the Teams meeting. I only used this when I wanted the Brady Bunch grid on-screen.

The Meetup gave me a chance to take my new home-brew autocue (aka “teleprompter”) for its first public outing.

The whole point of this venture is to be able to look DIRECTLY at someone in a video call, while at the same time staring down the barrel of the camera at them (as they perceive it).

Here’s a better shot of it (without its towel hood). 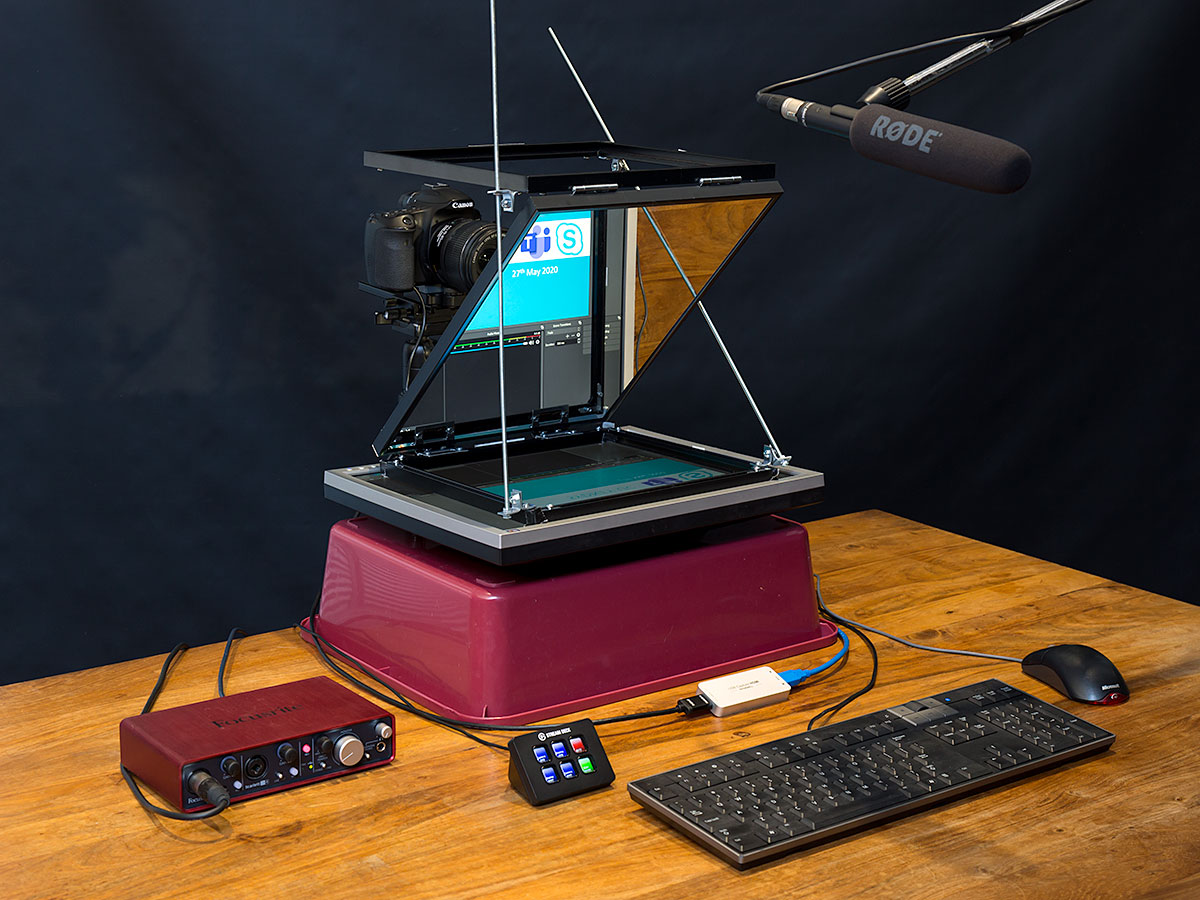 It’s just a sheet of half-mirrored glass in an assembly consisting of three extruded aluminium picture frames. The frames are connected by hinges in a “Z” arrangement, with two lengths of threaded 3/16″ rod providing the means of supporting the upper frame and adjusting for the required 45° angle of the glass. The hinges and rod enable it to pack down flat when not in use, making it both easy to store and portable as well.

I’ll write more of this in a subsequent post.

One of the downsides to shooting through mirrored glass is light that’s lost in the process – around 4 f-stops. As a result we needed a more sensitive camera and improved lighting. Using a DSLR gave us the extra sensitivity we needed, as well as complete control over focus and exposure, resulting in a more consistent image. Added to that is the superior image quality compared to just about every webcam.

According to its website, Ultramon is a utility for multi-monitor systems, designed to increase productivity and unlock the full potential of multiple monitors:

I used it for one purpose, and that was to take the main monitor and mirror it to the autocue monitor, flipped horizontally. No, Windows *can’t* do that particular rotation natively. Everything but.

The only downside I noticed is that it introduced a small lag between the image appearing on the main screen and its flipped view appearing on the autocue monitor. I’m guessing a faster machine would have reduced this. [Yes, see Lessons Learnt.]

You can download a full working copy for a trial period. I paid $USD40 for it. For eight times that price I could have done it in hardware with no lag.

The Canon 6D made for a wonderful webcam, but limitations in software mean it will only output video for 30 minutes and then go to sleep. Magic Lantern is essentially a “jail-break” for certain Canon cameras that not only circumvents the 30 minute limit, but also removes all on-screen overlays to give you a clean feed out the HDMI port.

My usual go-to when I want to convert an HDMI output to become a USB camera source is the Logitech Screen Share, but it didn’t like the flavour of HDMI that the camera generated.

The Magewell had no problems with it.

Popular with gamers and also the OBS crowd, the Stream Deck is a small desk-mounted box covered with pushbuttons, and each button is itself a small LCD display.

You can program the buttons to do just about anything, and the growing list of integrations link the buttons directly to program features, making it far smarter than just a keystroke emulator. The buttons can be made context-sensitive, automatically updating to follow the app that has the focus (if you wish).

Stack presses into a sequence, create multiple pages, the list goes on.

Rocky and I have one each. Your significant other will surely appreciate the hint to gift you one or two for your next birthday, etc.

During the Meetup I used the Stream Deck Mini shown in the images to control OBS. Being the presenter in the meeting this allowed me to easily change the view – an OBS “scene” – by finger feel alone, without needing to switch to an app, touch a mouse or look at a screen. (Teams doesn’t offer shortcuts to change the video feeds, so I still needed to drive the app directly for those changes.)

With the audio we might have gone a little over the top, so put this in the optional category.

The Scarlett is our go-to “audio to PC” converter. Think of it as a much higher quality external sound card for your PC. Scarlett feeds 48v phantom power to the Rode mike, acts as a preamplifier and outputs the signal as audio over USB. This became the microphone input into Teams.

Why not into OBS? That was our first approach, but for some inexplicable reason the audio quality was terrible. (It may yet have been the “shortfall” in processing grunt – see Lessons Learnt). As a result we fed the audio directly into Teams, but in so doing ended up with a lip-sync error nobody noticed(?) on the day.

The best microphone we have for the purpose is the Rode NTG-1 condenser mike, and it requires phantom power. The Focusrite provides phantom power so it was an obvious choice. There are a multitude of battery and USB powered microphones that could be used instead – or yes I could have just gone with the mike in the Poly 6200 you see around my neck.

The reason for choosing the hyper-cardioid pickup pattern of the Rode is that we live under a flight path, and the more directionally sensitive the microphone the better. And we happen to have one. (Two actually.)

Lessons Learnt – Things to do better next time

Canon, Fuji and presumably other camera brands have woken up to the opportunity that working from home provides for using their DSLR cameras as a high quality webcam.

We didn’t realise it existed at the time, but Canon’s “EOS Webcam Utility Beta Software” would have turned a 6D Mk-II into a hi-def USB webcam – but alas ours is a Mk-I.

Canon also has a “Clean HDMI” version that lets you use the HDMI output of their more recent models, if that’s better suited to your setup. (Scroll to the bottom of the Clean HDMI page for the list of supported models.)

Use a Faster PC

As described above, the setup had a noticeable lip-sync delay. This was to be expected given the audio was taking a shorter path than the video.

The machine we produced the Meetup on had a 3.1GHz quad-core i5 CPU and 8G RAM. We observed around a 200ms delay in the video.

After the event Rocky re-staged it on another machine, a 3.4GHz quad-core i7 with 32G RAM and the delay all but vanished, dropping to 10ms.

Flip the autocue monitor in hardware

If you plan to participate in a lot of video calls using an autocue, invest in something like a Decimator MD-HX. This takes HDMI in and will generate a flipped HDMI out. One of these would have reduced the monitor count by one and provided me with a closer-to-real-time view of the participants.

If you’re planning a similar venture, here are a few tips to help you succeed:

You might consider it a complicated setup, perhaps unnecessarily so, but I was a good experiment and has shown the sorts of production effects that are easily added into a Microsoft Teams meeting.

Did I miss anything? Have you done this better with less? Questions? Hit me up below.

14th June 2020. This is the initial publication.
16th June 2020. Updated the “Setup” image to show PowerPoint’s monitor feeds into both OBS and Microsoft Teams.