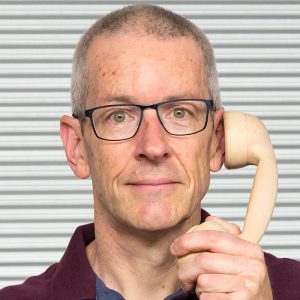 The phone in my ‘mugshot’ this year is, like me, quite a relic. It’s an ivory-coloured handset from a 400-series phone.

At the start of last century telephones were typically constructed of timber or metal. It wasn’t until the late 1920’s that the British Siemens company developed the first plastic phone, made of a “thermo setting phenolic material”.

These phones would evolve in technical design and aesthetic through the “pyramid” designs of the 162 and 232, and into the 300 series, developed in Britain in 1937 and introduced into Australia after the Second World War. The final evolutionary step of these early “plastic” models was the 400 series, introduced here in the 50s, with the only external change being the rounded mouthpiece replacing its predecessor’s more angular “horn”.

Coloured phones were rare in Australia. Whilst in Britain you might find them more commonly in “Chinese red”, ivory, jade green and black, the colours faded here in Oz and the green and red versions were quickly dropped, leaving only ivory as the alternative to black.

The bakelite 300 and 400 series are for me synonymous with my childhood, growing up in rural New South Wales in the 70s. Our local exchange used magneto signalling, and the requirement for a local battery and generator prevented us from upgrading into any of the newer 800-series “modern” plastic phones (which weren’t made to support that primitive operation).

I have a confession: I only have the handset. I don’t actually possess an entire ivory phone. I told you: they’re rare!