As with my previous post, this update so soon after the last looks to be brought to you by Apple and the number 9. 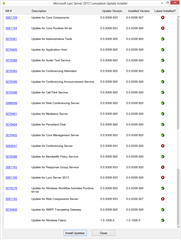 2nd October: This is the initial release.