Digicert mailed me this week to advise that the public Edge certificate on my Lab’s Cloud Connector Edition was about to expire. Duly forewarned I set about updating it, but I hit an unexpected error when I tried to activate it in the CCE:

I eventually managed to fix* it – and I’ll get to that shortly. (* It’s a bit kludgey).

Having updated the certificate (thank you Digicert!) and exported it as a .pfx file I copied it to the CCE, placing it in the folder C:\cce\SiteRoot\

The CCE steps are outlined in this TechNet article:

For step 2 above I ran this command: Set-CcExternalCertificateFilePath -target EdgeServer -path “C:\cce\SiteRoot\cceedgepool_gis365lab-12Jan2018.pfx” –import

… and as foreshadowed by Step 3, it returned an error:

As directed, issuing “Register-CcAppliance –Local” provided the opportunity to enter the new cert’s password – but then failed, this time with the puzzling error:

In the vague hope that all this red wasn’t a show-stopper, I repeated Step 2 to find that it no longer reports issues with the password – good – but is now also stuck on this “Commond” error. (That’s actually the first image up the top of this post).

Fortunately the CCE PowerShell module consists of a stack of scripts, making some of this debugging a little easier. It didn’t take me long to search through the PS folder (using the tips I recently blogged here) to find where “Commond” appears. You’ll find it in C:\Program Files\WindowsPowerShell\Modules\CloudConnector\Internal\MtHostCommon.ps1:

By looking at the $job variable I was able to determine this was indeed a typo, however correcting the reference back to “$($job.Command)” didn’t actually get me anywhere further – it still died, but just with more red on the screen than before: 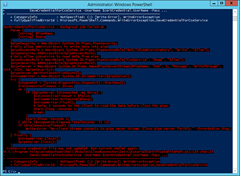 I spent a while trying to figure out what was going on, but ultimately I couldn’t determine the root cause. It was clear that $Job.State was failing but I couldn’t figure out why. I was also unsure if this seemingly recursive reference to $job was legit or another bug:

In the process of debugging it also became apparent that even though $job.State was reporting failure, everything seemed to be working fine! In the end, I simply commented-out the write-error line that was causing my problem and the scripts continued on their merry way: the cert was copied to the Edge server, Set-CsCertificate ran and the new cert was applied:

That only left me to close out Step 4 in the TechNet process with “Exit-CcUpdate” and we were all back up and running!

Fellow MVP Ståle Hansen has since shown me the error of my ways. It seems .NET 4.6.1 is a pre-req for CCE v2.1.0, and having updated my host accordingly, $job no longer reports failure.