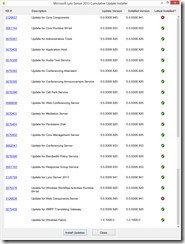 No – but I gave it one anyway.

7th January: This is the initial release.