I covered the new features in my last post, but wanted to particularly highlight this one as it’s quite ground-breaking.

I think the potential for this is vast: *any* call that’s going through the SBC can set a user’s presence:

The key to this is that you add the SBC as a “Trusted Host” in your Lync deployment. (This duplicate use of the SBC’s FQDN in the Topology is valid from 5.0.8308.866 – the second of the December 2014 updates). As a Trusted Host, the SBC is then allowed to set the presence for a user.

The user – or users – it sets is typically determined using an AD Lookup, triggered as the call follows a slightly modified Transformation Table. I’ve written of the AD Lookup feature several times in the past (e.g. here and here), and its power and flexibility is now enhanced with this use.

New Input and Output field types are added to the Transformation Tables to support the AD Lookup, and the result of these tests won’t change whether the table is true or false.

It shouldn’t take long to setup, and if your SBC is already using AD Lookups you’re already halfway there.

Sonus suggests your LDAP Query should be “msRTCSIP-PrimaryUserAddress=*”, as this will only return Lync-enabled users. If you’re doing anything tricky with AD Lookups you might want to stick with the more generic “telephoneNumber=*”, “msRTCSIP-Line=*” or similar.

The User Name and Password are those of a basic Domain User account, with its password set to Never Expire. The SBC will use these credentials to run its AD queries.

With “Normalize Cache” set to true, the SBC strips punctuation characters and the “tel:” prefix from AD results, reducing your effort to format the phone number into one that will hopefully match.

Unfortunately it also strips “sip:” from the front of a user’s “=msRTCSIP-PrimaryUserAddress=”, and derails Third Party Presence. The fix is to manually reinstate “sip:” in your Output field.

The fix is simple – just manually reinstate the “sip:” prefix to the Output Field’s value:

If you’re testing for both the Calling and Called party in the same Transformation Table – which is perfectly valid – the second and subsequent AD Lookups must use the double-equals. If you stick with the single-equals, all of the follow-on tests in the table are likely to fail if the first test failed, or you might end up only setting “half” the expected presence: only the calling party and not that of the called one. 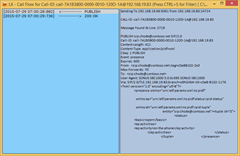 Variations on a Theme

In the introduction I suggested you could monitor lots of call types. Here’s a variation on the Presence Transformation Table. I’m hoping for a match on any 10-digit number that starts with “04” – a call to an Australian mobile number. I’m not looking up AD here: if the called number matches my Regex, I light Gilligan’s presence: 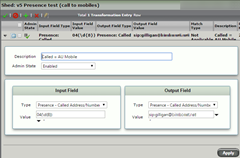 I tested this scenario with multiple simultaneous calls and the presence stayed lit as long as there was an established call – it didn’t go out when the first call cleared, which was what I was worried about / expecting.

Some words of warning: In the opening I enthusiastically suggested you could use this feature to keep an eye on all calls to a country or an area code. You might want to consider the potential presence traffic doing this will generate before you go there.

In the pre-release version of the documentation the feature was implemented using Action Sets and Action Configuration. I’m guessing this was before Sonus bypassed the “Match type” handling for Presence. If you still see it referenced in documentation, it still works to do it that way, but it’s a lot more cumbersome than the method demonstrated here. Here’s what the flow would look like:

Thanks to Sonus (& the Sydney team especially) for the sneak-peak of v5.

What other uses do you think you can put this to?