My ‘mugshot’ for this year is the British Trimphone. 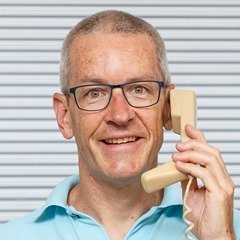 The Trimphone was designed by Martyn Rowlands for STC as a luxury telephone that the GPO could rent to its customers at a premium. 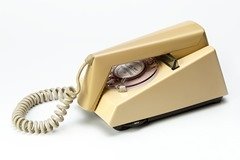 It had an innovative electronic ringer (at a time when phones still housed mechanical bells), and a dial that glowed at night thanks to a small glass tube of radioactive tritium gas exciting phosphors in the dial. It was a light phone – especially when compared to its bakelite forebears – and could be easily carried around by its loop-around hookswitch lever when the handset was out of its cradle.

The Trimphone won a design award in 1966.

As a kid in the 70’s with a love of phones I was attracted to all things telephonic. So keen was my fixation that when I saw Hitchcock’s “Dial M for Murder” in the TV schedule I initially thought it might have had something to do with phones but – spoiler – turns out it’s a “crime mystery film”.

I still remember my first sightings of the Trimphone – it was in the 1970’s UK crime series The New Avengers, starring Joanna Lumley well before her drunken days as Patsy in Ab Fab. 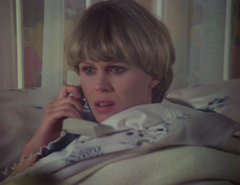 To this day I think it’s the distinctive tapered handset that I find the most appealing about it. 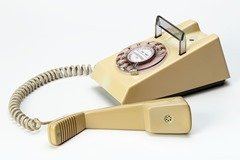 My phone came from Germany via eBay. It was originally cream – as revealed by the un-faded patch visible at the top of the phone in the image above.