MOST of the time they’re lovingly planned and conceived then eventually unleashed upon the world, although occasionally one gets away and I find it’s well in gestation before I’ve even realised it.

Still, regardless of the thought-processes and planning, there’s often a lot goes into a blog post and it’s perhaps worthy of documenting in itself. 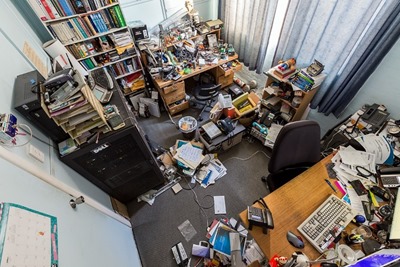 The greiginsydney Lab is either a thing of stunning techno-beauty or something to fill you with horror. It’s the third iteration, the first two being rooms in our previous homes. (Yes, I’ve lived in a total of three places in my adult life). Here we have the Dell half-height rack housing the two Dell servers, Nortel 48 port PoE switch and the countless PSTN Gateways that run the place. There are two of us here and most of the 48 ports in the switch are permanently lit. We’re not really sure how.

The room has two spots for human habitation. The computer desk (lower RHS) is where I spend most of my creative time. What clutter? This is where the PowerShell, .NET utils and blogs come together.

The other desk is the electronics workbench. It’s piled high with half-completed projects, random techy stuff I don’t have a better place for, test gear, cable offcuts, and the obligatory bench power supply & soldering iron. As I’ve aged and my eyes aren’t what they used to be I find myself doing less work on that side of the Lab. I think it’s also partly due to the nature of technology as well these days – you can achieve so much in software that you no longer need to be soldering chips or poking wires into breadboards. Of course my ageing vision coupled with the miniaturisation of components into tiny surface mount devices hasn’t helped either. I sometimes think that’s a bit of a shame – but then that’s the way nostalgia works, innit?

The shot above was taken with the camera on a stand, high up in the corner of the room. Glen drove it via remote-control from an app on the PC. And just in case it needs to be said, no the photo’s not staged at all. That’s what it looks like (on a good day).

BTW, I don’t actually “work” in the Lab. When I’m working from home (which is most of the time) I set up the laptop on the kitchen table each day and pack it away at night. I found many years ago that with my work PC in the Lab I didn’t have a distinction between the two activities, and it did bad things to my head-space. Now, I can spend a day working with Skype for Business on the kitchen table, then knock off and happily spend an evening PowerShelling in the Lab and still consider the latter exercise to be relaxation and home-time.

I’m fortunate enough to have a wonderful cameraman in-house, and he appears to enjoy the photographic challenges I set him, whether it’s screen-grabs of a phone as it boots, macro shots of the inside of a phone, or (of late) videos of me demoing something out here in the real world.

The images here – including the videos of my MWI series – are all shot on the Canon EOS 6D usually with a Canon EF 24-105 f/4L or a EF 100mm f2.8 macro lens for the close-up stuff. Generally Glen leaves the relevant metadata tagged in the photos, so if you’re ever that curious it’s there for the world to see. Depending on how energetic he is feeling, he’ll either use a standard Canon 580EX flash on a remote trigger and shot through an umbrella or drag out the Elinchrom strobes for the bigger stuff.

Here are some examples of the things he gets up to when left to his own devices:

Glen uses Photoshop for the post-production of all his images, and has become quite adept at it. It’s an amazingly powerful package, and I envy his skill.

For screen-grabs, I use SnagIt. I was lucky enough to receive a free copy when I became an MVP, and recently shelled out cash for a second licence for my work PC because I love it so much. Not only does it give me quick and easy pixel-level control in my grabs, but its powerful editing capabilities EASILY let me crop, merge, tear out, blur, highlight, annotate, etc… Here’s an exaggerated example using an image from my post “Locate Lync Lapses with a Look“: 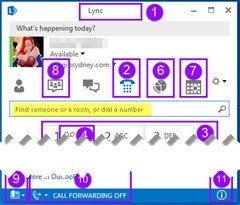 Glen and I met through community radio here in Sydney in the 80s (think college radio if you’re in the US), and he’s always had an interest in audio production. Back in the old days he was a dab hand at cutting and splicing 1/4” tape to remix songs and making promos, then moving into computer-based editing once CoolEdit arrived on the scene. Today, anything that needs doing in audio he edits in Audition, whereas I’m usually able to meet my generally more basic needs using GoldWave.

If we’re recording audio (say for the MWI videos) it’s with one of his Aussie-made Rode shotguns through a Yamaha preamp directly into the camera – thus ensuring we don’t have to worry about lip-sync in the mixdown.

As an MVP I’m lucky to have access to a free licence of Camtasia Studio and I’m really impressed with how powerful it is, and how quickly you can pick it up and create impressive videos with it! Video’s new to me but there are times you need it to show how something works. Now I’ve broken the ice there you’ll probably see a few more from me over time.

This is a ‘making’ of shot from the “Mucking with MWI – Part II” video record: 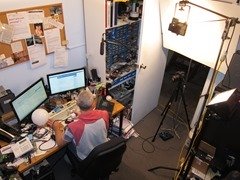 The posts are all authored in Live Writer 2012 and then uploaded to WordPress, where the importing bugs are massaged, the HTML tweaked and the post eventually sees the light of day. Live Writer has some annoying bugs (try ^Z to undo a paste!) but I’ve not yet found anything better. Please let me know if you’ve moved on…

See! There’s nothing to it!