I’ve blogged about our love affair with the Stream Deck programmable buttons before. If you’re not familiar with them, they’re a neat little “mini keyboard”, and under each key is a full-colour display. One of these will let you send a frequently-used key sequence with a gentle tap, and the inbuilt ‘Profiles’ allow it to change its layout depending upon which app has the focus.

With one of these on our desks here at home it was only a matter of time before the hubby asked me to add lighting control to it.

It’s a bit clunky, but here I’m using Stream Deck to POST some JSON to a Home Assistant automation, which in turn fires a script that squirts the appropriate command to KNX via HA’s KNX Integration. All you need to send is the relevant Group Address and the byte you want send. This allows for control of ANY light, all with the one automation and script.

The script is in the project’s repo at GitHub, see below, but here it is in its entirety.

Paste this into your HA’s ‘/config/scripts.yaml’ file:

All we do is issue a ‘knx.send’ command to the relevant Group Address (‘GA’) and the ‘payload value’ we send – in the context of the Group Address – dictates the action KNX takes.

To turn a light on, we just send a ‘1’ to its ‘Switch’ GA, and to dim the light we send the appropriate byte to its ‘relative dimming’ GA.

The automation exists only because you can’t trigger a script from a webhook.

It’s also in the repo, but here it is again in its entirety. Paste this into your HA’s ‘/config/automations.yaml’ file:

The ‘webhook_id’ is the URL we’ll send from the Stream Deck, and of course you’re free to change this to something else.

Likewise, ‘send2knx’ is the name of the script created in the prior step, so those two need to align.

TODO: Check the creation of the ‘id’.

There’s a trick to install the ‘JSONSender’ plugin: you need to download the code instead of clicking on the compiled version. (The latter still has a bug in it as at this date, which has been fixed in the code). 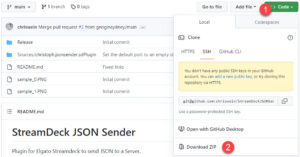 It’s important that you leave this blank. The required port (8123) needs to be baked into the IP as shown above.

This will turn group address ‘1/0/1’ on when the button is pressed:

This dims the same light (via its respective ‘relative dim’ group address) ‘up’ a step:

No Stream Deck? PowerShell to the rescue!

I’ve knocked up a basic Powershell script that you can fire from your computer at will.

Truth be told you don’t even need a script. You can just execute this from the command line:

If it doesn’t work, there are a few things to check.

The PowerShell command will very quickly isolate the issue to being either in your Stream Deck or Home Assistant. If PowerShell works, the problem’s in Stream Deck, but if PowerShell sends without error and nothing happens, I’d be focussing on HA. HA’s logging would be your next port of call. Check out the File Editor and /config/home-assistant.log.

Careful with your ports

The JSONSender plugin lets you specify the Port in its config, but that won’t work in our implementation. Make sure port 8123 is specified in the ‘IP’ field, after the hostname/IP address, as shown here: 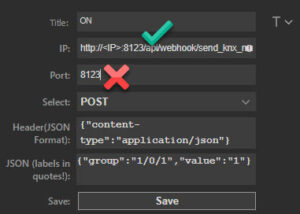 If it’s not working and Home Assistant logs your webhook is unregistered, double-check you’re not using the wrong version of the JSONSender plugin. Right-click on the plugin and Uninstall it, then re-install the code version as outlined above.

Sadly it seems the Stream Deck doesn’t have automatic key repeat, so if you press and hold a Dim button, the light won’t keep stepping – you need to stab it repeatedly until the light is at the intensity or colour you desire. It might be possible to edit the plugin to add that, but I’ve not looked into that.

In the script I’ve chosen a relatively large step value for these. If you decide it’s too large, just tweak the values down a little. (I used ETS’ ‘Group Monitor’ and ‘Write Value’ to sniff the values to send.)