This update appears to only address the recent meeting join issue for users of Google Chrome (as per the earlier December release), with a token mystery fix for good luck:

For all its apparent simplicity (with only two components updating), this one took FOREVER to install – and by “FOREVER” I mean I went and made a coffee while I waited. And then I waited some more. So I’d give it a good ten minutes before you even start to think it might be taking too long. 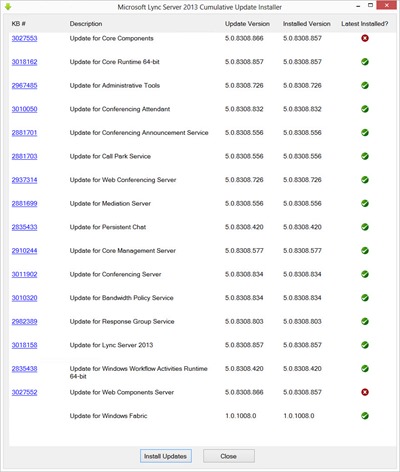 The September update listed as a pre-req that “You must make sure that all instances of the Event Viewer and Performance Monitor windows are closed before you install this cumulative update” so it’s best to follow that guidance here – especially if your servers AREN’T presently already at least at 5.0.8308.815. Other than that requirement, the update process remains much the same as usual, although the installation process for the Windows Fabric update (NOT required this time if you’re already on 5.0.8308.815 or later, as per my image above) also requires all Lync services are stopped before you run the installer. If your server is running at version 5.0.8308.291 or later (which I think just about covers everything BUT an unpatched brand new server) you only need to run my steps 1-5 below:

Here’s the proof of the pudding.

5th January: This is the original publication.