I found the above error in a client-side trace after having added a new Branch site (and SBA) to a running Lync 2013 deployment and finding Federation wasn’t working.

My users – previously resident on the FE but now homed to this new SBA – were unable to access Federated contacts, who would show as “Presence unknown”, and if I tried to send an IM to any of them I’d get the dreaded 504/239 error.

Strangely though, we were getting an MRAS token OK, and so the clients *weren’t* displaying the “Limited External Calling” warning you might have expected of an issue like this. This is from the Lync Client’s “Configuration Information” screen:

The SBA wasn’t happy, telling me “Connection attempts to the following services have failed” and pointing the finger at the Edge servers. 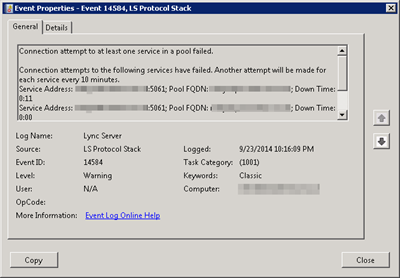 I didn’t see it amongst the noise initially, but the Edge servers were giving the best clue as to what was going on, throwing Event 14402: 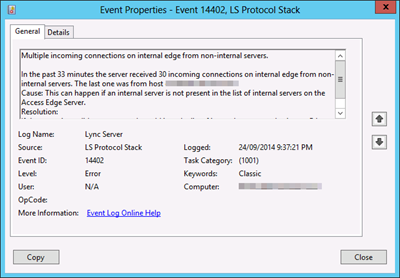 That led to the fix – with Ken Lasko pointing it out in friendly Canadian writing.

Restarts of the Edge servers were scheduled overnight and the new day saw the wonderment of Federation restored to the users. (Thanks Ken).