Of interest to me in this update:

2861301 A PSTN Call is disconnected in a Lync Server 2010 environment that is integrated with a UCMA 3.0-based application

2861320 No missed call notification when a caller hangs up a PSTN call before the call is answered in a Lync Server 2010 environment. (A blessing in disguise if you ask me!) 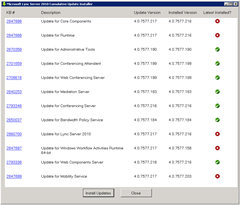 Thankfully there’s no need for a restart after this one, but I always think it’s worthwhile to give it a cleansing refresh while you have the opportunity.

And as always, don’t forget the database updates!