I struck an interesting one this afternoon. BIG thanks to my colleague Dan for the incredibly simple fix.

I’ve deployed an on-premises Lync 2013 for customer. Whilst ostensibly a “greenfield” installation, my initial publish of the Topology revealed there was already a Lync SCP in AD. I removed it easily enough with “Remove-CsConfigurationStoreLocation” and continued.

In the process of deploying Lync I also found there was evidence of an old OCS server – complete with users still homed to it. “Get-CsUser -OnOfficeCommunicationServer | Disable-CsUser” put paid to them – or so it seemed at the time.

Roll forward to go-live and we have a few users complaining they can’t login. They’re getting an invalid credentials error, and I’m seeing Warning 30020 in the Event Logs: 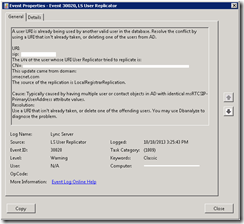 I dug out DBAnalyze (part of the Lync ResKit) and asked it what was going on, and surely enough, OCS reared its ugly head:

I could disable and enable my Lync users to my heart’s content, but it didn’t change anything. Lync was also adamant that there were no users remaining “-OnOfficeCommunicationServer”.

I noted that the SID reported by DBAnalyze was a different object to the active user account, and I then checked the SID in AD to see if they existed as a different name. No luck there either – an error every time. (Thank you PowerShell tips).

In the end the fix was as simple as issuing “Update-CsUserDatabase”.

After waiting a couple of minutes I repeated the DBAnalyze query and the output for each user was vastly different – now all full of Lyncy goodness.

So thanks again Dan. I was worried I was going to have to start hacking directly into SQL, and no-one wants to go doing that…