I recently had a customer with a retail presence ask if we could interface Lync to the paging / public address / PA / evac systems in their stores. “Sure”, I said, then thought I should POC it up to see just how we’d go about it.

Turns out there are a number of ways you can do this. Here are the ones I’ve found. Choose the option that suits your environment best!

Back in prehistoric days when PABXs roamed the earth we used to connect the PA system to an analog trunk circuit (an “FXO” port) or perhaps a tie-line circuit. This was a relatively neat interface, as it provided the audio on a single pair, and the inherent “supervision” of an FXO or E&M circuit meant it cleared as soon as the paging party hung up the line.

FXS ports are UGLY. When you call an FXS port, a ringing signal of 90+V AC is sent out the line to ring the bells. [It *hurts*]. The PA interface needs to ‘trip’ this in order to answer the call, and at the same time prevent it from reaching the amplifier. There are real supervision problems with using FXS ports in this direction, as there’s no electrical indication provided to the PA system when the paging party hangs up. (My Telephone Intercom is effectively a pair of back-back FXS ports if you want to read some more).

Here I’ve POC’d the entire solution using a Quintum Tenor ASM200 with an FXO interface. The only tricky bit is that you need a relatively fancy LIU – one that feeds 48VDC to the Tenor to simulate the presence of a telephone line. With just a basic transformer-only LIU the FXO port sees no voltage, so it thinks the port’s faulty. This is a basic level of supervision inherent in the gateway and unfortunately it can’t be overridden.

This config seemed fine on paper, but it has a few failings:

Despite my initial preference for the “simplicity” of the traditional paging interface, the lack of better audio supervision (the cut-through to the trunk) means I can’t recommend it.

I also think that for security and safety reasons if you’re going to implement this anywhere larger than a small office you’d want to take the Contact/trunk configuration option, rather than setting it up as a csAnalogDevice. 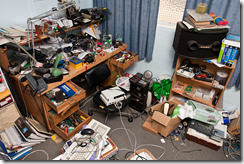 This is what my Lab looks like. Honestly. The output of the LIU is feeding a tiny home-brew amp (sitting in the top drawer) that uses a Philips TDA1521A SIL amplifier IC to do all the work. It has a bulldog clip as a heatsink, is currently powered from the bench supply (on the bench’s shelf), and is driving the Bose 802 on the bookcase. My computer desk is opposite, and only marginally less cluttered.

FWIW, I did initially try this with a UX1000 & an FXO card. The 4-port FXO cards for the UX1k sell here for around AU$500, and because it uses a trunk port we don’t need any SIP or Transcoding licences in the UX, making it a little easier to configure and deploy.

Unfortunately I had terribly distorted audio through the FXO port, and the UX wouldn’t calibrate the trunk port (not even with the Telstra PSTN line connected). I’ve put this down to a bug in v2.2. v181 (or some config quirk I missed). Next time I can get my hands on a UX with an FXO card I’ll have another go at it.

“ERROR: Port calibration failed for the ports listed below. Please ensure the lines are plugged in and retry.”