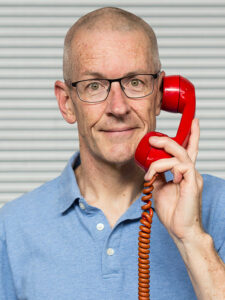 I’ve long been fascinated by electro-mechanical devices – a contraption that uses electricity to make things move in the real world.

This explains my love of pinball machines, and of the wonderful mechanisms inside public telephones (“PTs”), both of which I have examples of in our home today. It probably also explains the drive to build crazy effects for our annual housewarming.

Had I realised this earlier in life I might have ended up in process control or industrial engineering, but telephony drew me in.

My ‘corporate mugshot’ for 2021 is the chunky, heavy handset from an Aussie “Redphone”.

The Redphone was manufactured by the Tamura Corporation in Japan and imported into Australia by “Victa Telecommunications”, the Victa brand more known to Aussies as a mower company than for telephony. Victa provided this service to the PMG from 1963/1964[1] until its public telephones arm was purchased by the PMG (soon to be Telecom) circa 1974/1975[2].

I first encountered these as a teenager at boarding school in the 80’s. You inserted your (then) 10c piece and the presence of a coin removed a short-circuit across the dial springs, allowing you to dial a number. When the called party answered the line polarity was reversed [aka “ROA” – reversal on answer], an electromagnet fired and your coin was swallowed. 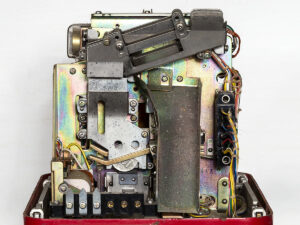 In this image the coin is resting on the black shelf, having operated the brass lever on its way through and enabling the dial. The shelf is controlled by both the switch-hook and the electro-magnet. On answer the shelf would tilt forward and the coin drop into the coin safe below. If the call attempt was abandoned, returning the handset to the cradle would tilt the shelf backward and the coin would be returned to the refund chute.

I quickly learnt that a deft flick of the switch-hooks prior to answer could see your coin returned and the line not drop. An internal governor mechanism on the switch-hooks was meant to prevent the (re-)connection of the line until several seconds after the handset was lifted, but the governors were prone to breaking and rendering the phone again vulnerable to this exploit. The handset weighs over half a kilo (more than a pound) as it’s full of lead(?) so as to exert enough pressure to reset the governor when it’s returned to the cradle. 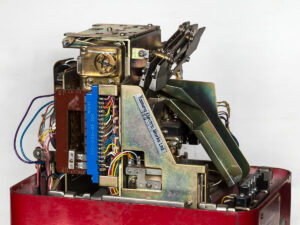 The governor is the circular assembly with the clear cover immediately above the blue terminal block.

My PT collection started with a banged-up old Redphone generously gifted to me by a Telecom field technician in a chance encounter on a suburban Sydney street in the few days between leaving boarding school and returning home to the bush. He was replacing it, and he let me take it after I told him I was about to commence with Telecom as an apprentice technician. (It was only destined for the scrap heap, via a telephone collector’s heaven called the “Sifting Room”).

I’ve trimmed the PT collection these days, with only the RedPhone, an “AB” Box and a mint condition “Sydney Workshops 6d/5c Long Tom” remaining. The Long Tom is bolted to the wall, connected to a Ribbon Tenor Gateway and is configured as a CsAnalogDevice in my on-premises Skype for Business deployment. It’s also full of 5c pieces.