In the process of migrating a customer to Lync recently we inherited an obligation to provide a *BIG* Message Waiting Indicator (MWI) light whenever a voicemail message arrived in a particular high-priority mailbox. That inspired me to embark on a campaign to see how many ways I could bring an external MWI light to reality.

There are some pros and cons to this that we need to document:

Here’s a quick demo of the solution:

There’s nothing to it. All we’re doing is extending the phone’s MWI LED so that the LED in the SSR is added in series. When one lights, so does the other.

Why not in Parallel?

Being techy himself, Glen asked me why I went with a serial approach over wiring the LEDs in parallel. There’s no right or wrong answer to this one, but without knowing what was driving the phone’s LED, I thought running them in series would be more friendly to the phone’s electrics. This results in a slight reduction in brightness of the phone’s LED, and you can see the difference in the video when I unplug the SSR from the phone – the intensity of the phone’s LED jumps up. A serial connection also covers us if – as in the case of the AudioCodes – the LED in the phone is blue. Blue LEDs require a higher voltage to light, and if we paralleled a red LED across the blue there’d be the risk the blue one would no longer illuminate.

Finding the most suitable phone to use turned out to be the hardest part. I took apart most of the phones I had here at home and in the end it was the CX600 that stood out as being by far the easiest to mod. (The others I’ve detailed below).

I tried a few others but only the AudioCodes 420HD and Polycom VVX 410 appear to make the cut – and then only if you practice micro-surgery in your spare time. The most suitable phones appear to be those with a separate MWI LED and not one that’s a part of a switch or buried in amongst the keypad.

I had an old Snom 300 here but the LED wouldn’t light at all – not even when power was applied and every other LED lit. I don’t know if my phone’s faulty or if it’s too old to support this feature. It’s a shame as it’s a cheap phone and the LED is easy to get to: it’s mounted on the rear of the PCB, poking through a hole in the board to shine forward. (Click the image for a larger version). 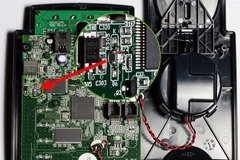 I thought the Snom 700 had promise, but as I researched it I found that the big LED in the top corner *can’t* be used as an MWI light. This annoyed me as it’s REALLY easy to get to it and its wiring. Not to be deterred I refocussed my attentions on the mid-mounted Message button, but upon closer inspection realised it was going to take some doing – and I wasn’t game. The LED’s in a switch that’s on the front-facing side of the board, and I honestly doubted I could get it all back together after and still have the switch functioning and LED visible. If you have a spare you’re willing to sacrifice, take it for a whirl and let me know how you go. Send pictures. :-)

The blue MWI LED on this guy drew me in like a moth to a flame. Remove the five screws and then with the phone face-up use a jeweller’s screwdriver or thin knife at the mid-point of each side to tease the snap-together clips apart. Be careful here as the headset socket and handsfree mike are mounted in the rear half by short cables. Both can be gently eased out of their mounts to free the two halves of the phone. With a good eye and SMD-capable soldering iron you should be able to de-solder the LED without further disassembly. I suggest you remove it entirely then reinstate it rotated through 60-90 degrees. With one leg on the board that will give you easy access to the other solder pad and to the free leg of the LED, whilst still letting the LED shine through the opaque part of the casing. 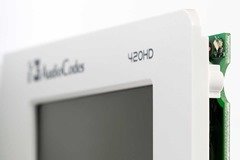 It took more time to remove all *9* screws holding the Catalina together than it did to dismiss it as too hard. The tiny MWI LED in this is part of the sandwich of buttons held to the face of the device by the PCB. Even if you *could* get it apart and back together again so that the buttons still worked, you’d have a hell of a time re-routing tiny wires to the back for the socket. Only for the determined or those with Olympic-grade stubbornness.

Eight screws gets you into the VVX 410 and the back pops off. (There are two hidden in the foot-stand slots). It looks do-able as well, with the same micro-surgery approach as per the AudioCodes. A few notes here before you start though: the LED winks at you in normal operation. That might be a good thing or a bad thing. Also, be careful to disable the power-saving LED otherwise you’ll get false indicators of MWI when the phone goes to sleep. A recent comment on my “Optimising the VVX for Lync” post gives that config element.

Have I missed any? Let me know if you have any questions or concerns.