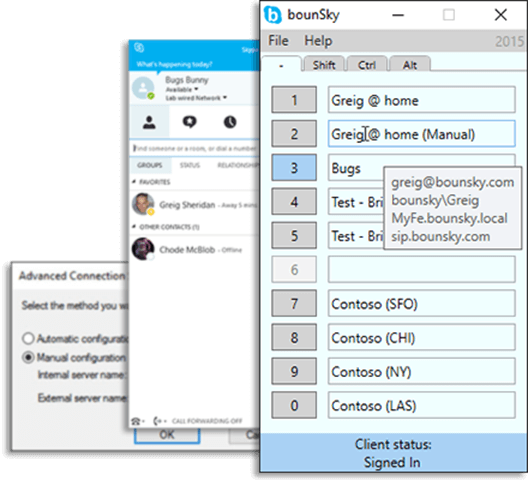 The re-branding from “Lync” to “Skype for Business” in 2014/2015 forced many of us in the community to change blog names, Twitter handles and the like. I was luckier than some having chosen the novelty/parochial “greig in sydney .com” tag for my blog and social media ID, however “Profiles for Skype for Business” just wasn’t going to work – it didn’t fit in the title bar of the app to start with!

I’ve been using the sub-head “Bounce between user accounts with a single click!” on Profiles’ listing on the gallery.technet site for years to describe what it does, and after a lot of brainstorming it eventually occurred to me that “bounce” and “Skype” would contract nicely together and create a new word. And here we are.

Under the skin, “bounSky 2015” is essentially just the latest release of Profiles for Lync, with some new features and a bugfix or two. And a pretty new blue icon.

Paralleling Microsoft’s own nomenclature, this “2015” release is built on the latest version of the SDK for the Office 2013 – but it still works for the Office 2016 client (as you may have already found). I’ll stick with the 2015 release name until MS gets around to releasing an update to the SDK for Office 2016, although there seems to be no imminent threat of that.

If you’re an integrator/consultant (as I am) or support anything larger than a very basic single-site Lync or Skype for Business deployment, this app fills what has been to date an annoying gap in the feature offer: with bounSky it’s now as easy as clicking a button (or a few key combinations) to sign yourself out and then back in with another set of credentials – or even into another deployment altogether!

On the Setup / Options tab is now the ability to specify a Shortcut Key combination that will pop bounSky out of the system tray, or bring it to the foreground if it’s minimised or hidden behind something else on screen.

With a new Shortcut Key to pop bounSky I thought I’d add one to dismiss it now too. If you hit <Esc> from the main screen the app will minimise to the Taskbar or Tray, as per your choice on the Setup / Options page.

You can find bounSky on its own website – with a user guide, troubleshooting and FAQs. The latest release is always signed by the certificate I’m generously provided by the wonderful people at DigiCert who support the MVP community.