TLDR: I think it’s broken – or as James Arber implied on Twitter, it might have made it out the gate prematurely.

My suggestion: Do not install this version!

Before you can install it you’ll need to uninstall the previous version: 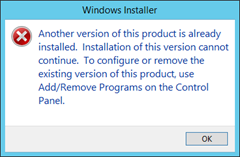 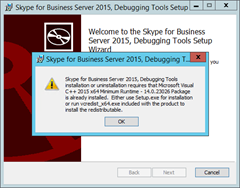 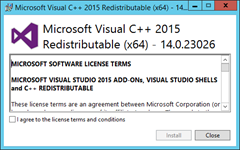 And then install the updated Debug Tools: 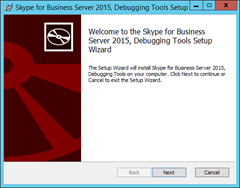 … Then when you run ClsLogger, it crashes with an unhandled exception: 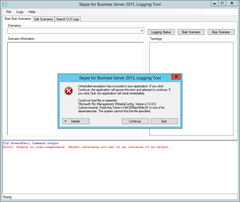 I owe a debt of gratitude here to fellow Sydney-based MVP John Liu who quickly jumped on my Tweet and linked me to a great article by Scott Hanselman that helped me from this point forward.

The crash happens on every SfB server I’ve run this on, as well as my x64 client PC (from where I normally only run Snooper). My Windows 10 Creator machine happens to have Visual Studio on it, and the Fusion Viewer (fusionvw.exe), which pointed me to the cause of my woes.

If you want to try this at home, here are the Registry Keys to set (@ Computer\HKEY_LOCAL_MACHINE\SOFTWARE\Microsoft\Fusion) to enable its logging:

Here’s what it revealed:

OK, so it’s just looking for a DLL and/or an EXE in the same folder as the Debug Tools. We’ve all been there – someone just forgot to add them to the install package…

Shopping around I found quite a few versions of “Microsoft.Rtc.Management.WritableConfig.DLL” around the place – check out C:\Windows\Microsoft.NET\assembly\GAC_MSIL\Microsoft.Rtc.Management.WritableConfig – but alas my efforts at copying any into the Debugging Tools folder all resulted in failure. Now when you run ClsLogger it crashes with “the located assembly’s manifest definition does not match the assembly reference”.

I think James nailed it: this one made it out the door too soon. Looking at the version number you could reasonably guess it’s accidentally leaked from the rumoured on-premises “vNext”. I expect we’ll either see a re-release & rebuild (with the missing DLLs), or it will vanish and we’ll see 6.0.9319.73 reinstated. Watch this space.

Cookie reports he’s been able to open Mac client log files with this version of Snooper, so maybe there is some benefit to be had:

well it does open the sfbmac.log and I see ucwa traffic logged!

@greiginsydney took a while but the sfb debugging tools download is fixed – https://t.co/dR9deTATsZ

David Paulino reports via Twitter that the download’s been fixed, but alas that turned out to be a false alarm for me: the download (despite being shown on the page as “6.0”) still installed as the broken 7.0.1678.1.

Until it’s resolved, check out the download link below for the last known working version.

I think we’re finally there. Here’s a paste-up of what Snooper reports + the installed program version on my Lab server:

If you’re NOT seeing something resembling v6.0.xxxx.xx as the installed version, Microsoft’s CDN might *still* be dishing the old version. Just grab my backup version below and try again in a month or so.

My backup copy of SkypeForBusinessDebugTools-6.0.9319.73.msi

8th February 2018. Updated – appears to be largely fixed, although some CDN issues are still being seen around the planet.

24th June 2017. Added a link to a copy of the last known working version of the Debug Tools & Cookie’s tweet.