It’s been a big week for Music On Hold. I’ve found a bug in the Office 2016 client that kills MOH if you mute, and another one again – this time related to the path your Office installed itself into.

The symptoms were simple enough: internally, or for external parties when the Sonus SBC’s own MOH feature was disabled, putting callers on hold resulted in them hearing silence.

I thought this was going to be a simple client policy fix, but nup:

The above tells me that client-side MOH is enabled for everyone across the board, and without a value for “MusicOnHoldAudioFile” the client will use its inbuilt default, which it revealed thus: 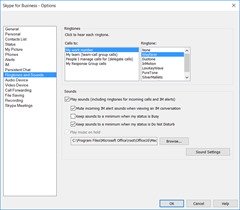 HOWEVER, here’s where the client’s installed:
C:\Program Files\Microsoft Office\Office16\Media\DefaultHold.wma

And there is no /root/ branch in the folder tree!

I don’t know how it got this way, but as I’ve only encountered one client showing this problem I just created the required folders and copied DefaultHold.wma across. I bounced the client for good measure and all came good.

I was curious to see if the error was logged anywhere so you could perhaps easily determine how widely/if you were affected. I couldn’t find any mention of it in the Applications Event Log – it looks like it’s handled internally and the client moves on.

Here it is as captured in Lync-UccApi-0.UccApilog:

… and here’s what the on-hold event looks like when it succeeds:

I can’t say for sure. The client version I found this on is the Office 2016 MSI, and so far only the one instance.

You have a couple of ways of fixing this, depending on how widely you’re affected: