Earlier this year I looked in some depth at the Beta version of Landis Technologies’ “SEFAUtil Server”.

It’s since hit a formal “GA” milestone, and I’m pleased to see it’s a more stable platform as a result of its lengthy gestation.

If you’re not familiar with Microsoft’s “Secondary Extension Feature Activation Utility” for Lync and Skype for Business – or why there’s a burning need for third-party add-ons like SEFAUtil Server – have a read of the intro from my Installing SEFAUtil Server and pop back here when you’re done.

SEFAUtil Server is offered in a free Community Edition and a paid Enterprise Edition. As a result of a recent licence revamp Community Edition is now limited to deployments of less than 50 users, but gains the benefit of the full suite of features. This table shows the differences between the versions: 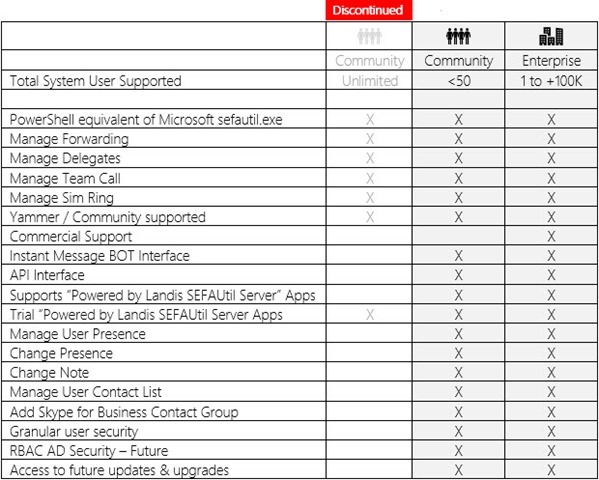 For a more detailed breakdown of the features, download the PDF User Manual.

In my earlier look I focussed on the (then) limited Community Edition, and this time I wanted to take *all* of the features for a spin.

Both versions use the same code-base, so you can start with a Community Edition installation and then upgrade to Enterprise at any time as your deployment grows. That’s as easy as contacting Landis Technologies (see below) and installing your new RegistrationKey with “Set-SefautilServerRegistration”:

These following commands are now available to all users, regardless of version.

Without SEFAUtil Server there’s no easy way to build or manage a user’s contact list programmatically. To date your officially-sanctioned options are using the AutoInitiateContacts attribute of “Get-CsPrivacyConfiguration” or the similar Smart contacts list. Alternatively you’ll find tools that go digging around in SQL from regular contributors like Guy Bachar & Corky Caragol on the gallery.technet site.

Here now is the ability to populate or edit a customised contact list for a new starter, a department, or perhaps for everyone after an acquisition, relocation or product launch.

To “Set-CsUserContactList” you supply a user and one or more contacts, then the groups to add them to or remove them from. Here are your options for where to add to or remove from:

A feature not captured in the documentation is the ability to create a new Group: you just reference the new Group name in the “GroupsToAddContactsTo” attribute. If it doesn’t exist it will be created, and the contact(s) added to it.

When I executed the above Commandlet, Chode vanished from Jessica’s Favourites in an instant. Having repeated the command I received the same output, where I would have liked to have seen the familiar “WARNING: Object with identity <blah> was not changed”. (I’ve already fed that back as a PI request).

Absent is the expected “get” version of this command, which would increase its utility significantly by allowing you to view and clone user contacts, although perhaps it was deliberately omitted for privacy reasons (despite the information already being accessible through other tools).

These two Commandlet pairs let you easily change someone’s personal note or presence state in real-time. They deliver as expected in an instant, with changes visible immediately.

I think a feature unique to SEFAUtil Server is that Get-CsUserPresence shows the last device to set the presence state. Here it’s shown as “Computer”, but I was also able to get it to show “DeskPhone”. Dissapointingly, if you change the presence via SEFAUtil server, it doesn’t appear to update the PresenceSource – but that’s apparently a weakness in the SDK not the app.

One of the *major* value-adds is the IM Bot. Back in the installation process you were prompted to create a TrustedApplicationEndpoint with a SIP address, and you can send that address an IM to set a Personal Note or change someone’s Presence:

(See these messages in the context of an IM in the image under “Fine-Grained Access Control”, below.

The Bot is also able to Enable & Disable call forwarding and sim-ring.

A weakness in the current GA build requires you to water down your IM Filtering before the Bot will accept commands. The work-around is to remove the filter on the “sip:” prefix

Elsewhere there‘s a global setting that controls whether SEFAUtil Server will notify users when changes are made to their account, or remain silent:

Here’s a sample of an IM that popped to my user when I made a change to their presence state: 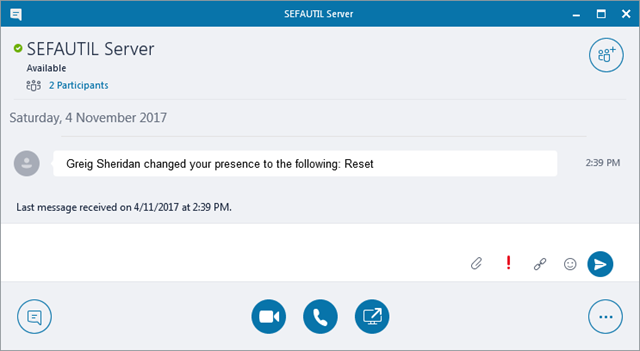 A JSON file on the server lets you restrict who can make changes, to whom, and even what commands they can execute!

Out of the box it’s open slather, so you’re likely to want to lock this down before it gets anywhere near production. Check out the file “SSAdminPermissions.txt” and the examples in “SSAdminPermissions_Example.txt”. Both are in C:\Program Files\Landis Technologies LLC\SefaUtilServer\.

This was all I needed to add to lock it down so I’m the only person who can change Jessica’s account:

Here’s a demo of the Bot, with me updating the permissions file in between – hence why the responses change from “ACCESS DENIED” to “SUCCESS” apparently mid-conversation: 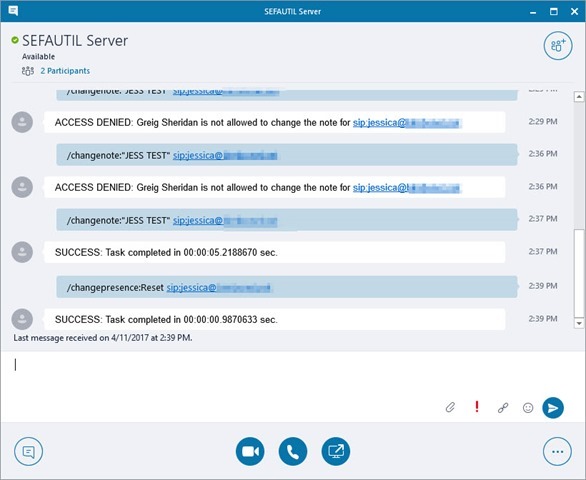 I noticed that the change made to SSAdminPermissions.txt wasn’t picked up instantly and I needed to restart the SEFAUtil service for it to take effect. Hopefully the app reads the file occasionally and you don’t need to take it offline each time you make a change to the permissions.

Enterprise Edition is licenced in two components, with an initial fixed cost and an ongoing annual support payment. The entry-level Enterprise Edition licence (for up to 300 users) is $1500 and on a diminishing cost per user after that, scaling to well beyond 10,000 users. To the smallest (Enterprise-Edition) installation, add $600 for annual support. These are list prices in USD.

To procure a licence, just send an e-mail to sales # landiscomputer.com.

SEFAUtil Server simply blitzes Microsoft’s native offer – there’s no comparison. Deploying the Community Edition into a small on-premises EV deployment is [and I hate this cliché] a no-brainer. If your deployment is large enough to warrant Enterprise Edition I think its breadth of features – some unmatched anywhere else – combined with its performance will deliver a favourable cost-benefit analysis, and there will be plenty of customers for whom its benefits are INSTANTLY justifiable.

SEFAUtil server is still in its relative infancy but it’s improving in leaps and bounds. It still has a few foibles, but they’re being addressed by a responsive and enthusiastic vendor.

WITHOUT A DOUBT if you’re using Enterprise Voice in your on-premises SfB deployment, you need SEFAUtil Server. If you don’t think you can justify the expense of Enterprise Edition, I’ll just leave you to run with Microsoft’s rudimentary SEFAUtil until you come to your senses. ;-)

My trial licence came gratis courtesy of Matt and the team at Landis Computer.