A customer reported an interesting bug that found its way to me today, and in the washup it turned out that I was somewhat directly the cause. Ouch.

The problem was that anyone hosting a “Meet Now” meeting on the Trio was unable to add participants. When they pressed “+ Add” on-screen button, the phone reported “Service unavailable”, and offered no further explanation.

Interestingly, I was able to dupe the issue here in the greiginsydney Lab, which at least made the testing a bit easier.

Logging on SfB revealed nothing – no errors at all – and the App logs on the device also drew a blank.

I wondered if there was a problem with the user account. The Trio was signed in as a normal user here on-prem, so I confirmed it was enabled for EV and that it didn’t have any restrictions in its conferencing policy. My other users were able to Meet Now and add participants, so that seemed to vindicate the environment.

I factory defaulted the phone – nope, still faulty – and then commenced a process of elimination in the config file.

Here I hit paydirt, as taking the scythe to the “custom-trio.cfg” file (slicing it metaphorically in half) and rebooting the phone resolved the issue – so I knew it was something in the config that the phone wasn’t liking.

Eventually it came down to this sucker:

This is the description from the latest Trio Admin Guide:

Who would have thought that restricting the phone’s ability to create local conference calls would prevent you from hosting a Skype for Business meeting?

Is this a bug in the firmware? Should the phone be referencing this parameter for Meet Now calls?

The Trio config file I use in my master Polycom config repo (previously here, but now resident on Github) started off as a “save-As” of the VVX config, refined for the Trio. I’ve today updated it to remove this parameter altogether.

Thanks to Pav & Scott who helped with a test in their own environment, and to Mike for serendipitously roping me in on his ticket.

My apologies to anyone who’s found themselves bitten by this. 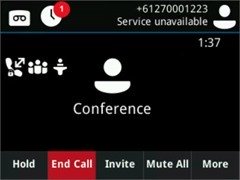 (Thanks to my colleague Naimesh for pointing that out to me.)

I’ve updated “customisations.cfg” on Github already to remove this rogue setting – which a Polycom source agrees should not be applying to SfB calls.