As Michael LaMontagne so succinctly put it on Twitter, the monthly CU’s we’ve been seeing recently are to make up for the dearth of them at the start of the year. And so it is that three weeks after the October update we have another, this time taking Lync Server 2013 from 5.0.8308.831 to 5.0.8308.834.

Of the seven MSIs in this update, only three have any specific fixes mentioned, with the rest containing the usual improvements to the “reliability, stability, and performance” of the product. Here are the fixes we know of: 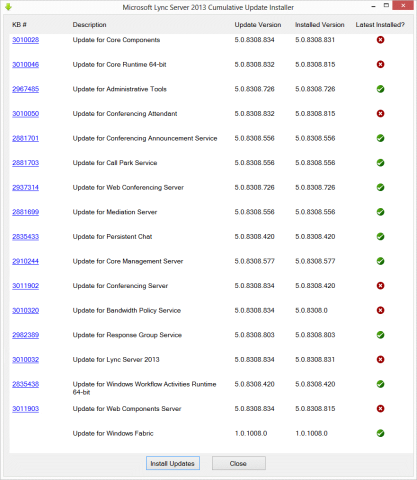 The September update listed as a pre-req that “You must make sure that all instances of the Event Viewer and Performance Monitor windows are closed before you install this cumulative update.” so it’s best to follow that guidance here – especially if your servers AREN’T presently already at least at 5.0.8308.815. Other than that requirement, the update process is much the same as usual, although the installation process for the Windows Fabric update (NOT required this time if you’re already on 5.0.8308.815 or later, as per my image above) also requires all Lync services are stopped before you run the installer.