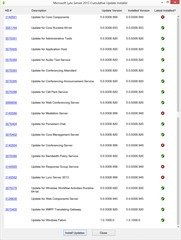 If you’re not reading the fine-print in How to apply this update you might miss this additional installation step:

22nd May: This is the initial release.