I last blogged updates to the Office 2013 / Skype for Business 2015 client in August last year. There appear to have been two releases in the intervening period.

It contained one documented fix:

There are no specific fixes listed, other than that “this update improves translations for multiple language versions of Skype for Business 2015 (Lync 2013).”

There’s no traditional “Before/After” image pair in this post, as this one snuck onto my client while I wasn’t looking. 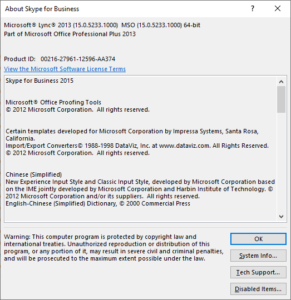