“For additional guidance about planning and deploying Shared Line Appearance in your environment, see the following TechNet articles:” 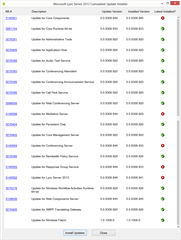 If you’re not reading the fine-print in How to apply this update you might miss this additional installation step:

16th April: This is the initial release.
22nd May: Added SLA to “what’s new?” & the “Update-CsAdminRole” installation step