This is part 2 of a 2-part series covering how we built the “Disco Death Star”:

Here’s the final version of the control PCB. It’s a bit of a dog’s breakfast, but it’s what you get when your proof of concept morphs through prototype stage to become the finished product. 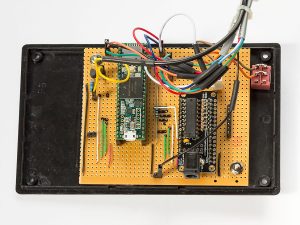 At the left is the Teensy 3.6 that’s running the show, and on the right is the “Octo Level Shifter FeatherWing“. The level shifter is there purely to convert the Teensy’s 3.3V IO pins to the 5V required by the LED strips. I SHOULD have used a “Teensy 3.2 OctoWS2811 Adaptor“, but I didn’t know at the time it existed – and of course that explains why there wasn’t a Teensy version in the store and was forced to compromise on this Feather version. (D’oh!)

To the right of the Level Shifter are 8 header pins – those are the data feeds to the ball.

As it was initially built, that’s all there was. When you applied power the ball ran the chases in a random order, each for a semi-random period of time (in between two bounds I’d hard-coded).

I won’t go into the DMX side of things here in much detail, but suffice to say I didn’t think there was enough grunt in the Teensy to balance the timing requirements of receiving the DMX512 data string AND driving all the LEDS out 8 IO pins simultaneously – and if there was, I doubted my own ability to pull it off.

Accordingly, I opted for a discrete controller, based on a SparkFun ESP32 Thing Plus and its DMX to LED Shield. Special commendation here goes to luksal for their ESP32-DMX-RX, which worked for me where the native SparkFun library would not.

My DMX interfacing needed to be primitive because I didn’t want to add a processing load to the Teensy, and so it uses 5+3+3 IO pins in a parallel arrangement to signal pattern, speed and brightness, respectively. All of this is the cluster of cables at the top of the board in the image above. Five of the connections are the top five bits of the eight bits of the first DMX channel, giving a possible 32 patterns, whilst the other six pins are two lots of three IOs that give eight possible speeds and eight brightnesses.

The heavy black cable in the image is the “panic button”. Should the ball controller lock up at all – as it’s done on very few occasions – taking that IO pin high out of the DMX receiver would pull the Teensy’s hardware reset pin low. This inversion is done by the BC547 transistor visible among the yellow cables at the top left of the board.

Finally, what’s the back-end of a toggle switch at the top right switches the controller in and out of DMX mode. With DMX switched off, the ball goes into an automatic mode (subject to the code).

It may come as no surprise to learn that the ball’s code started life as the “DemoReel100” example from the FastLED codebase on GitHub.

To that I added the XYMatrix for the “serpentine” layout, and later the parallel output and eventually the OctoWS2811 code which saved the day, giving the ball the speed boost that it so desperately needed at the time. (I had help from Reddit here too, as I was way out of my depth and running out of time.)

With the code running – albeit on the “test ball” referenced in Part 1 – I created some basic patterns of my own. Here’s an example of how simple this can be: turn on every LED in a column (`for (int y = 0; y < kMatrixHeight; y++)`), and rotate around the ball - remembering to turn the previous column off as you go. When you increment the column counter and it overflows off the edge of the ball into invalid space ('x >= kMatrixWidth’), reset the column to zero and keep going.

Once I had it running I added “int stripes = n;” which then let me make the lighthouse’s “beam” multiple columns wide.

I find it amusing that our persistence of vision sometimes makes it look like more LEDs/columns are lit than really are.

Here are some of the amazing patterns we were able to find on the Internet:

… and here are a couple of my own creations:

That’s a total of $818, to which you’ll need to add several $hundred of misc electronics and hardware, so let’s call it easily a thou+. (We’ll overlook the LED string on the “test ball”, the second set of Teensy & level shifter, and some of the eBay power supplies I binned in disgust.)

SO many people have contributed to the FastLED project, and I’m indebted to them all. Thank you!

The patterns I’ve found online made up the lion’s share of the 32 that are coded into it. I’ve endeavoured to credit them all in the code, and in the videos of them on my YouTube channel.

Special thanks to Rocky for patiently papier macheing the ball over more than a fortnight. Had we realised at the outset how much effort would go into this step alone, we would have abandoned this as a technique, and maybe the whole project altogether.

If we had our time over, we’d do a few things differently. Here’s the short version:

31st December 2019. This is the initial publication, back-dated in the blog’s timeline to July 27th.
8th January 2020. Corrected the $US conversion maths. (Thanks James). *blush*