Those of you with a passable grasp of southern hemisphere geography will have by now figured out that the Greiginsydney juggernaut is based in a small town on the eastern seaboard of Australia, famed for its harbour, impressive tin bridge, & a 50-year old Opera House modelled on the peel of an orange.

To locals however it’s a land of ludicrous property prices, perpetual traffic chaos – and cockroaches.

For quite some time the phone in the kitchen has been a Tanjay (aka CX700). It lives on top of the fridge and has a long curly cord so I can chat while I wander around the kitchen preparing (usually) the evening meal.

It’s had this annoying ‘bug’ for quite some time whereby at random intervals it will play a fast busy tone quite loudly out the handset – while it’s sitting idle in the cradle. And it will usually do this a couple of times over a few minutes before settling down to behave again:

Twelve months ago we had a terrible storm and some water entered the building. Among the casualties was the Tanjay on the fridge. I happened to have another here so I just swapped it out and life went on as usual – and strangely that included the busy tone problem!

OK I say, “if multiple Tanjays are doing this, clearly it’s a bigger problem…”. I enquired on the MVP distribution list but no-one mentioned any known issues. Puzzling.

Then only recently I happened to be in the kitchen as it put on its show – except this time I heard dial tone out of the handset that then led into the fast-busy tone. OK, so it’s going off-hook, then timing out. Why on earth would it be doing that?

(I’ve shortened the period of dial tone in this recording down to < 5s).

I still had the dead Tanjay, so I cracked it open and the true source of the problem was quickly revealed. Yup, cockroaches.

As you can see from the photos below, the hookswitch / gravity switch operates a lever that interrupts a light beam when the handset is lifted from the cradle. So should one of my little friends be wandering around within and settle in that spot, the phone’s electrics will believe the handset’s been lifted and play dial tone…

So yes, being able to reproduce the problem is normally an indicator that the issue isn’t specific to the device itself, however sometimes it’s pointing you to something amiss in the environment instead.

And just in case you’ve ever wondered what the insides of these look like, here’s “the bigger picture”: 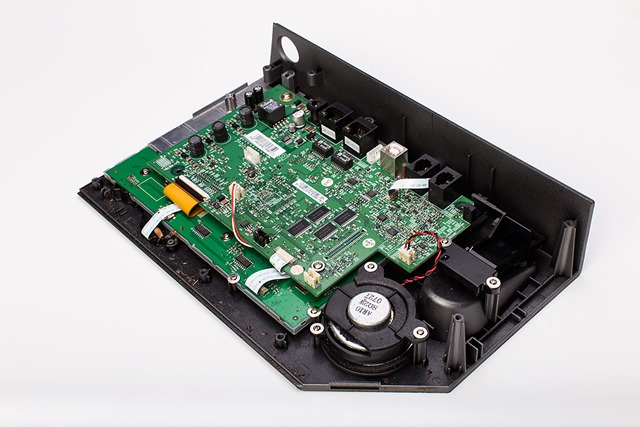 Check out the big chunk of aluminium at the far LH edge – that’s presumably heatsinking, covering the entire back of the colour touch-screen. And of course to cockroaches, anything that generates heat makes a wonderful radiator to warm by, or incubate your babies.

Bugs in the Machine

“Cocky” (or the plural “cockies”) is a slang term we Australians confusingly use to describe our native bird the cockatoo, someone from the bush (a farmer), and the dreaded cockroach. (Yes, context is everything). 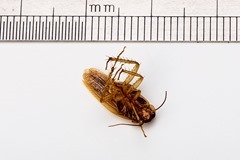 These creatures are drawn to sources of heat and generally love our Sydney weather. For the record, we don’t like them, we still fight to eradicate them, however they breed much faster than we can ever hope to deal with them.

The term “bug” has been around for quite some time to describe the unexpected behavour of a device, with a moth credited as being the very first computer bug.