To say it was rather devoid of technology was an understatement. It was almost entirely devoid of *lighting*, FFS!

The term “home automation” (herein “HA”) is used a lot these days, and it covers a vast range of technologies and functionality.

Wikipedia defines HA as “building automation for a home, called a smart home or smart house. A home automation system will monitor and/or control home attributes such as lighting, climate, entertainment systems, and appliances. It may also include home security such as access control and alarm systems. When connected with the Internet, home devices are an important constituent of the Internet of Things (“IoT”).”

That sounds all very Jetsons or Star Trek, complicated, expensive and futuristic, but you don’t need to go all-out to have HA.

I like to consider HA as just using a non-traditional control system or input to switch an output, something other than a directly-connected wall-mounted switch or a dial to control a light. (Maybe HA comes when you abstract the control system from the device?)

Personally, we’ve been on this HA journey for decades, and I reckon our first HA device was probably one of these – a Clipsal Infrascan PIR detector: 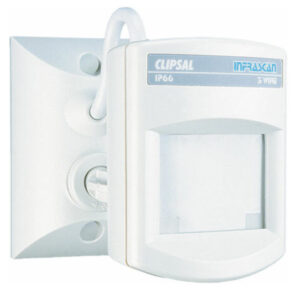 I can’t find a reference that documents definitively when the Infrascan was released, but a couple of random websites both said it was 1984, so “pioneers” like us have had HA for almost 40 years now without realising!

Or maybe you’re old enough to remember those light switches that responded when you clapped? 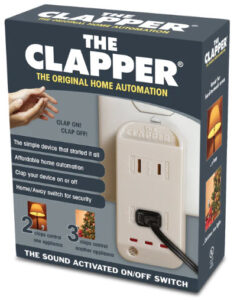 These are probably the most direct ancestor to Alexa, Siri and co. Rather than calling out “hey <trigger word>”, you clapped and the light turned on or off. Home Automation! [Wikipedia – “the Clapper”]

Our first serious foray into HA came in 1999 with the installation of a basic C-Bus deployment.

Home was a ~1917 semi-detached brick building in suburban Sydney, still with pipes protruding from walls where the original gas lights had been. With solid walls having prevented the installation of hidden cabling at the time it was electrified, the lights were all controlled by ceiling-mounted pull-switches.

Here’s what the tech looked like, mounted up in the roof: 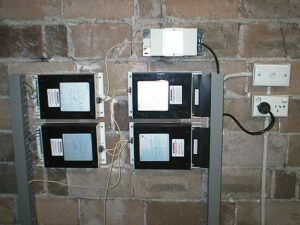 The unit at the top is a power supply that feeds 30VDC into the cream-coloured bus cables, which some of you will recognise as 2-pair telephone cabling. The two units on the left are 4-channel “AUX” input modules, and the two on the right are a 4-channel dimmer and a 4-channel relay.

Most of the inputs to the AUX units were connected to the pull-switches. A sneaky trick with those is that you can remove a spring in the mechanism and what was previously a toggling switch became momentary. The C-Bus config allowed you to briefly tug the pull-string and the light toggled on or off, but if you pulled on the cord and held it, the light would dim, cycling from full to off and back again. When you were satisfied with the level you let go and the dimming stopped at that level. Another quick tug and the light extingushed.

Not pictured are the serial programming interface module (with its DE-9 connector) and another AUX input module that lived with the burglar alarm.

We moved house a few years later and took all that with us. It was still relatively early days for C-Bus back then, and those first-generation units didn’t have the thermal protection of their successors. Living in the ceiling cavity under a tin roof meant they were prone to playing up on the worst of Summer days, and we decided not to foist that burden onto the new owners – and besides, we wanted HA in the new place!

The very rare extreme-heat-related failure notwithstanding, C-Bus had proven itself rock-solid, so it was a done deal that we would be (re)installing it in the new place.

The next 20 years were spent growing the C-bus installation. As the technology matured I added many more modules, including an Ethernet interface. That then let me write a web-based control front-end I called “C-Change“. 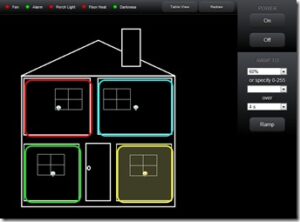 This time period coincided with the introduction of Wi-Fi, and a quick scan through the photo archive shows a WiFi Access Point in situ from 2006, so that helps place its arrival in the evolutionary timeframe.

Over time Apple invented a phone, then came the Raspberry Pi and HomeKit, and ultimately they all came together in an app for the phone that empowered Siri to talk to the lights: 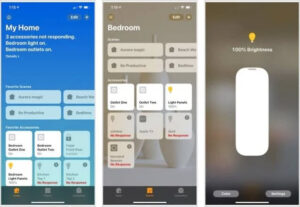 The C-Bus was so thoroughly entangled in the place we couldn’t remove it when we sold up, so it was left for the new owner to enjoy. By this stage the whole deployment was ‘C-Bus2’ which included thermal protection and continued to demonstrate ‘bulletproof’ reliability, so I had no qualms about leaving it.

With a blank HA canvas on which to start, our new home wasn’t automatically going to be C-Bus, but it was going to have *some* kind of Home Automation.

In the 20+ years since commencing this journey, Clipsal’s been bought out by the multi-national Schneider Electric, and to my mind poor C-Bus has been largely left to rot. Sure, the switches have been updated into the current plate designs, but there’s not been much movement beyond that.

Researching my options I found that C-Bus has what looks to me like an identical twin called “KNX”, but they’d been separated at birth.

Per my simile, both twins appear to share the same genetic makeup, and that’s reflected in the almost identical architecture: a ~30V DC power supply feeding a twisted-pair bus to which are connected input (“sensor” in KNX parlance) and output devices (KNX “actuators”), with miscellaneous support devices adding USB or Ethernet connectivity, to run advanced logic or serve web-pages for remote control.

The big difference between both is that C-Bus has one manufacturer globally – Clipsal in Australia – whereas the global knx.org parent oversees 500 member companies in 190 countries making north of 8,000 KNX-certified “widgets”, all of which play nicely together and are configured with the one PC-based application.

Check out its Wikipedia page for lots more info, or the 24-page “KNX Basics” PDF if you want to get a little deeper.

3rd September 2022: This is the initial release.