After now several false starts, we have a re-re-release of the September Lync 2013 Client update.

This is the update that introduced speck-checking to Lync IMs, reinstated the old “chasing its tail” circular OCS presence icon in the tray, and – my favourite – “paste special”.

Assume that you install the September 2013 update package for Microsoft Lync 2013 that is mentioned in update 2825630. In this situation, your calendar information and OOF information aren’t synchronized between Microsoft Exchange and Lync 2013. For example, when a meeting is scheduled in your Outlook calendar, the following issues may occur:

I’ve not seen it documented anywhere, but it appears that this flawed update (and its predecessor) has also broken the option to have call forwarding settings apply “during work hours”, as set in Outlook: 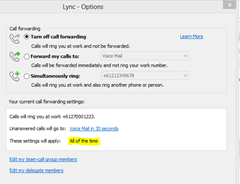 (The text highlighted in yellow is normally a link!)

My very hasty and unscientific testing would so far suggest if you have the client running when you launch the update you’ll be required to reboot. If you kill the client first you’re spared the reboot.