Hot on the heels of the v5.0.0 release comes v5.0.1, and with it, a chance to finally take the .CAB updating process for a test drive!

… and quite a few more Boss/Delegate fixes.

(These are just an extract – there’s PLENTY more fixes in the firmware’s release notes PDF).

The process was simple enough.

The PDF stipulates that you need to uninstall the v1.0.0 of the Connector first, however in my experience the installer handled this OK. It manifests on screen to be installing v1.1.0, but the occasional “removing files” flashes by. After the mandatory reboot the installer re-launches with a “resuming setup” screen, and by the time it’s done you have 1.1.0 ready to go. Nice!

The goal here is to have the phone suck its firmware from Lync, but first we need to make a couple of changes to the .cfg file on the FTP server to permit this. (Thanks to Jonathan McKinney for his help finding the settings).

If you followed my earlier article on the v5.0 VVX, you’ll have a “shared.cfg” file on the FTP server. Edit it to add the entries I’ve highlighted in yellow:

[Nov15: I’ve made a couple of minor XML formatting edits above to address errors reported by the phone, although it seemed to be correctly acting upon the “faulty” values regardless!].

BTW, the “<feature feature.btoe.enabled=”1″ />” line isn’t mandatory here, but I expect a lot of installations will want BToE enabled by default, so here’s where to do it.

Without logging in to your FTP server, a quick way to tell if the “lyncDeviceUpdateEnabled” settings haven’t been set yet is to navigate to Settings / 4Status / 4Diagnostics and look to see if “Lync Device Update…” is visible on that menu. (On my phone it’s option 6). If it’s not there, neither are the values above. 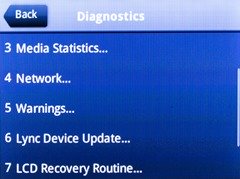 When I first ran the upgrade it upgraded fine – then immediately rebooted and downgraded itself back to v5.0. I figured there was a clash between the FTP’s config file (pointing it to the v5.0 firmware) and Lync pointing it to v5.0.1. The fix was easy enough – edit the “000000000000.cfg” file to remove the reference to “sip.ld” in the APP_FILE_PATH: 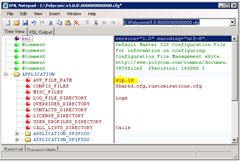 (Just delete “sip.ld” and save the file)

Now we need to prep the FE with the new firmware.

From the main menu (home screen?), I touch More, and it shows I have an update available – so I press “Dev Updt” and awaaay we go…

… and we have a phone again – with BTOE enabled by default: 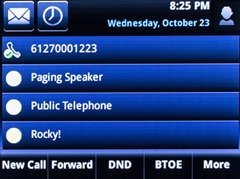 Touching “More” now no longer offers me an update: 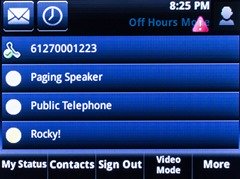 And here I am confirming the end-game:

I’m impressed that Polycom has followed v5.0.0 with 5.0.1 so soon, and delivered with it so many fixes and enhancements. We’ve not yet reached many people’s dream of BToE to a PC on another network but as far as “minor” dot-update releases are concerned, 5.0.1 really delivers.

Now I have the VVX updating its firmware from Lync, I’m expecting the next firmware release will be a doddle to roll out.