Having worked out in my previous post how to get a VVX working with a Wi-Fi network connection, the next obvious challenge was to go fully cordless, and that meant ditching the PoE. 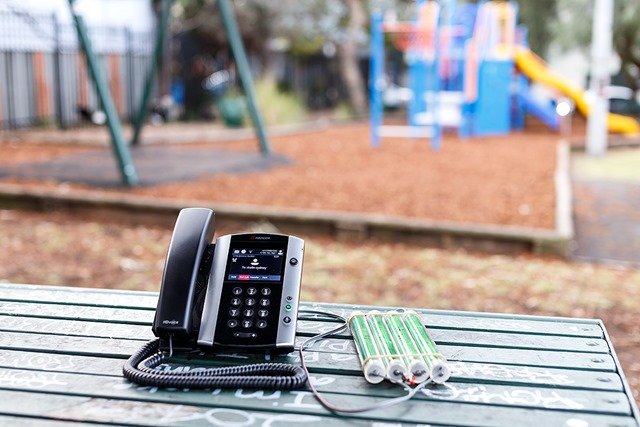 If you’re powering a VVX locally instead of through the LAN cable, the power supply feeds it 48V DC at up to 0.31A. (“Coincidentally”, 48 x 0.31 = 15W, which might be a familiar figure if you know your PoE power classes).

I reasoned that Polycom’s decision to go with 48V over 5V for the local power was for compatibility with the incoming PoE feed and presumably to minimise additional component cost for the dual powering support.

PoE is transmitted unnecessarily high (from the phone’s ultimate perspective) purely to minimise transmission losses over Ethernet cabling. If you’re a little rusty on your Ohms law, the key point here is that the amount of power lost (wasted) is the square of the current drawn, so every time we double the voltage we drop to a quarter of the power lost in the cabling. In boosting the voltage to 48V we minimise current in the line and you can power your phone over some distance relatively efficiently from the wiring closet. And at the far end the phone just turns it back to something like 5V to run the logic…

So Let’s Make A 48V Battery

Just about any battery you’ll encounter is merely a combination of individual cells all tied together to give you the required output voltage at the current you demand. The two old laptop batteries I (carefully) smashed apart revealed a collection of individual Li-Ion 18650 cells in a series/parallel wiring configuration. 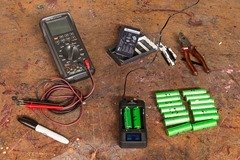 The 18650 is the workhorse of modern battery packs – they’re everywhere. If Wikipedia’s to be believed, they’re even powering your Tesla! The individual cells charge to 4.2V and discharge gradually, holding for the greatest part of their discharge cycle at around 3.7V before they reach their “knee” point and die horribly on you.

The Sonys I randomly ended up with are rated @ 2100mA/h, which to the layman is a little misleading, because whilst expressed as “a ludicrous number of mA in an hour”, this value is calculated over a 10 hour discharge – so these will give 210mA per hour for ten hours, still well below the 70mA the phone was pulling on the bench.

These were *carefully* charged one-by-one in a Li-Ion charger I bought for the purpose. I say “carefully” because if mistreated, batteries in the Lithium family can go off like a flare. (YouTube bears plenty of evidence of this). And you wonder why airlines get nervous about you packing spare batteries in the hold… “Don’t try this at home kids”.

For the battery holder I went with a metre of 25mm (1”) perspex/acrylic tube cut into 4 x ~22cm lengths, glued side-by-side with Selleys “QuickFIX” cyanoacrylate solvent-based glue to make a flat slab. (Use the wrong glue on perspex and it will go opaque on you). The end-caps are 20mm PVC conduit end-plugs that I crudely turned down on the bench grinder to fit inside the 19mm ID of the tube. The negative poles are a 3mm nut and bolt with a small spring for some tension, and at the top (positive) end it’s just another 3mm bolt pushing down on the string of cells against the spring at the far end. It’s a bit rough but it did the job. 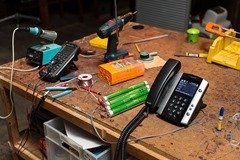 Proof of the Pudding

Once the setup was bench-tested we took it to the park across the road from home to put it through its paces in the real world. In the main image at the top of the post you see the phone’s signed into our Wi-Fi and I’ve made a call to the Conferencing Attendant. All 100% legit. Dinkum, even.

Whilst this crude battery only lasted for maybe 30 minutes before it failed, it’s clearly a viable concept. Remember, these cells came from *discarded* laptop batteries rather than brand-new stock, and fresh ones would obviously last a whole lot longer.

As far as a proof of concept goes, it certainly proves that it *is* possible to make a cordless VVX. My thick-walled acrylic tube made the battery bigger than it needed to be, but it shouldn’t be much effort for a commercial manufacturer to make one that fits inside or around the foot-stand. If anyone sees this and is inspired to make a VVX version of the beloved Polycom SoundStation2W, please remember me when you make your first $1M.

Thanks as always to Rocky for the pro shots, and Kats for taking the “making of”. 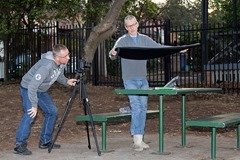