I recently realised my Lab’s Office Online Server is broken, and it looks to have been down since these (November) Windows updates were applied on December 11th: 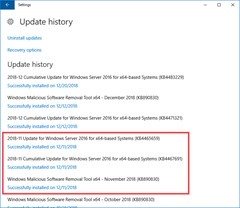 (I’m running with the US date format MM/DD/YYYY for the time being).

This machine is running Windows Server 2016 and Office Online Server 2016 under Hyper-V. It has 4 virtual cores and 2G RAM.

After enough of those, the system will throttle the alarms and drop an event 28 into the log: 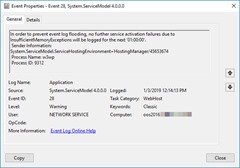 Quite surprisingly, despite all the above, the standard test of browsing to https://<WAC-OOSFQDN>/hosting/discovery SUCCEEDS!

Well, when an error says “insufficient RAM” and you’re running a server on 2G, the course of action is apparent. I upped it to 4G, but alas, same problem: still with the event 3’s and still can’t add a PPTX into a meeting.

I didn’t screen-grab Task Manager, but even with 4G the machine was running @ 97% memory use – and the bulk of that was IIS.

Anyway, now with 8G of dedicated RAM it’s behaving fine – still Unhealthy of course, but that’s a story for my next post.

As per my highlighting, I think a bare minimum of 12G should be your starting position in order to be considered compliant with Microsoft’s recommendations.

If you happen to find any better clarity around the use of OOS in an SfB environment, please drop the details in a comment below.