According to the kb, “This update enables Location-Based Routing to support the Skype for Business mobile clients”, but the last one said that too.

It also fixes the following issues:

We have a pre-req! (OK, to be true this one was introduced with CU6 in December, but I thought I’d mention it here again in case you skipped that one).

“To apply this update, you must have Microsoft .NET Framework 4.5.2 (Offline Installer or Web Installer) installed.” 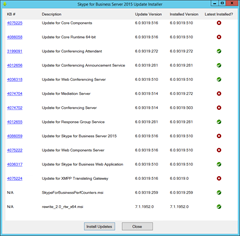 This popped at the end of the installation:

This prompted me to install it on 2 more SE FE’s, an Edge and my Applications server, but the error failed to recur. Was that a fluke, or perhaps just something triggered by my woefully underpowered FE? I guess time will tell. Please add comments if you encounter this, and I’ll update the post if I see it in the real world.

The installer didn’t prompt me to reboot, but I always like to give it one for good measure!