Is this a pre-req for Skype for Business 2015 server?

Strictly, no, but in reality it’s looking more like a YES. If you’re planning on performing an in-place upgrade of your Lync 2013 server to Skype for Business the published minimum is 5.0.8308.738, which was the August 2014 update. I think this is overridden by one of the fixes above (kb3062801) that addresses a known issue with conferencing data loss when migrating users to a Skype for Business pool. So by my reading that makes this KB a pre-req!

My lab Front-End here’s not the most blessed with resources, and it took just on 6 minutes to install. The end of the process prompted for a reboot. Here’s the ‘before” view: 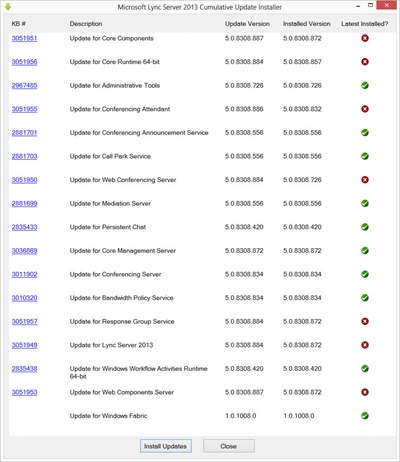 3rd May: Updated “is this a pre-req” to say ‘not officially, but yeah’.