OK, with that mandatory common-sense warning out of the way, those of you who know why we’re doing this are welcome to continue reading.

Today was the *second* occasion in the last fortnight where I’ve needed to talk to a customer’s SBC that was still running a relatively ancient version of firmware – and none of my browsers would let me circumvent modern-day security practices to access these “unsecure” sites. The Catch-22 is of course that the only way to upgrade their inbuilt web-server to use currently secure protocols is via their present-day obsolete web-server, which your browser is “correctly” shielding you from.

These are the sorts of messages you’ll encounter if you try to browse to a Sonus or AudioCodes SBC that’s been neglected, languishing on old firmware, and unless you’re mighty lucky, you’re not going to get anywhere: 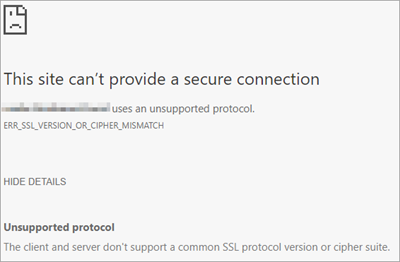 If you’re lucky, you might be able to just get away with re-enabling SSL 3.0 in IE: 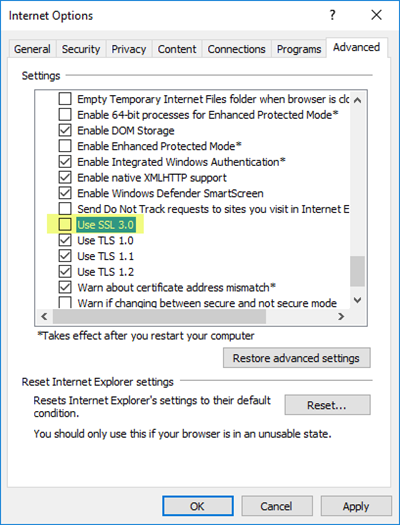 (This only worked for me in one of my scenarios, where the SBC firmware was only maybe 12 months old)

OK, this won’t work with a Sonus, but you might get lucky and find an AudioCodes will let you in via http! (The AC SBCs default to accepting connections on http *and* https).

This seems to be a popular go-to for lots of people:

I’ve resorted to an old laptop with Windows 7 running IE11 to access web interface on those.

This one’s suggested on a Firefox support forum. It didn’t work for me, but you might have more luck.

In order to change your Firefox Configuration please do the following steps :

A few people suggested trying Firefox Portable, a standalone build of Firefox that can be run from a memory stick (Wikipedia). They don’t appear to keep their own repo of old versions, and I didn’t know whether I could trust any of the sites that were, so I moved on.

Try an old build of Firefox

If you’re still at a loss after trying all of the above, hopefully the Firefox archive will be your salvation. Having reviewed the detailed release history on Wikipedia, these two major releases caught my eye:

That led me to settle on the last bugfix update immediately prior to the removal of RC4:

It should come as no surprise to learn that Firefox defaults to “check for updates” enabled on install, and despite me thinking I’d gotten to that in time, it was already updating itself! 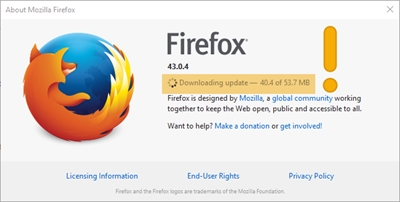 See if you’re quicker than me to turn this off: 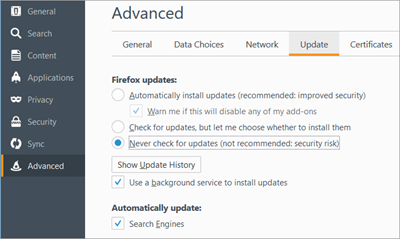 My suggestion here is to either disconnect from the Internet when you run Setup, or move quickly. If you weren’t quick enough and it’s already wanting to update itself, just decline the UAC prompt: 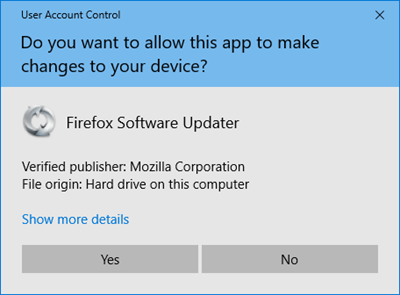 At this point you’ll still have the remainder of this session left to talk to your SBC and get its firmware to current.

I installed & uninstalled Firefox repeatedly while preparing this post, and it looks like it leaves its settings behind when it’s removed. That means that even if it upgrades on you (after you’ve said not to), a fresh uninstall & reinstall will leave you with a version that won’t update on you.

Tada! Hopefully from this point it will be plain sailing. 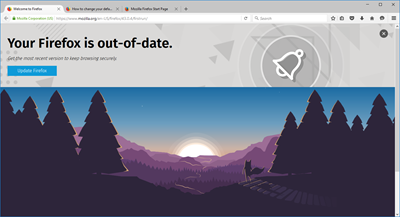 I thank my colleagues for their suggestions, as well as everyone who responded to my Tweet:

Anyone have tips for browser or settings for an *old* @sonusnet SBC 1k/2k? I keep getting “Cannot communicate securely with peer: no common encryption algorithm(s). Error code: SSL_ERROR_NO_CYPHER_OVERLAP”.