Today we see build 7.0.2046.409, which updated four components on my Standard Edition Front-End.

Nothing noted, however ONE new cmdlet snuck into the SfB module in this update:

This “test-” cmdlet joins the only other verb we have for that noun, the “remove-“.

After you uninstall this update, the standard MACP user sign-in URL (“https://<your pool FQDN>/macp”) fails. Instead, you have to use the following URL to sign in to MACP:

Note the now critical trailing slash. I tested this without the trailing slash and it worked, so I don’t know if this is an old notice that’s now obsolete, or still relevant in some scenarios. One to note regardless.

I got curious, ran boostrapper (not called out as required), bounced iis, and the same URL worked, without needing the trailing slash. 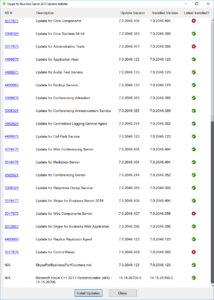 The installer didn’t prompt me to reboot, but I always like to give it one for good measure.