Released separately, the client updates (two of them) were released on Feb 11th, with the server side arriving on the 26th.

The client updates are detailed here, and this package includes a handful of feature enhancements, as well as the expected bugfixes. One such enhancement – “Enables users to receive buddy invites from untrusted networks” – makes a lot more sense after the Lync Conference and the Skype integration session. Aha. It’s so a user can protect themselves from the SPIM that arrives via unwanted invites. This screen-grab is from the “Alerts” tab, showing the new group and the defaults:

There are two different update packages and the article linked above says “make sure that both the LyncLoc package and the Msores package are installed”. I thought this was a bit puzzling, so I had a bit of a play, and my experience so far suggests that the “Msores” version is only applicable to the full Office install. If you’re running Lync Basic, you can probably just get away with the LyncLoc version. (I haven’t been able to snaffle the free-standing full Lync client yet).

These images are captured from a test scenario using the x86 Lync 2013 Basic Client on x86 Windows 8.

If/as this situation becomes clear, I’ll add more to this (or subsequent) posts.

The server update was pre-announced at the Lync Conference, with much excitement around its imminent arrival. It takes the server to 5.0.8308.291. 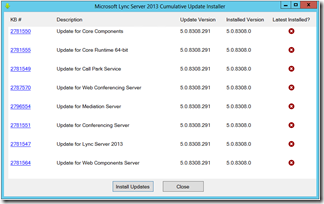 It delivers a great collection of new functionality, including:

Here are a few that jumped out at me. You can read about the lot in the link below.

Read more about it here, and download the installer from here. And don’t forget the database updates, which become more complex with SQL mirroring!!