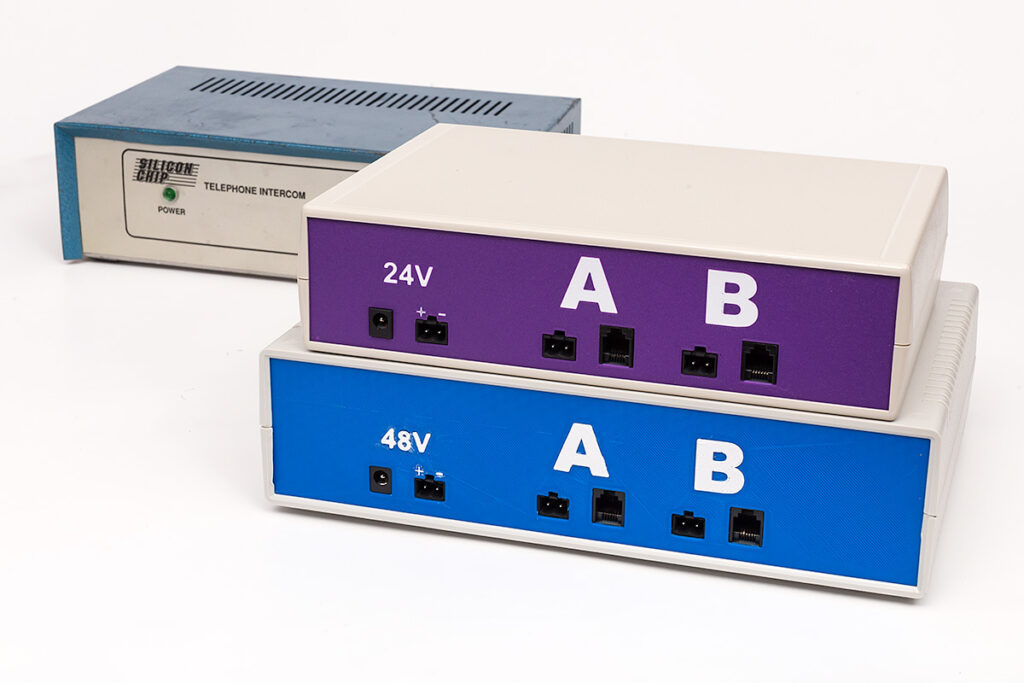 My original telephone intercom project was published in Silicon Chip magazine here in Oz in May 1992. Photocopies of that original article are still available from Silicon Chip, and they kindly let me re-publish the circuit here.

The intercom unit powered two telephones, allowing you to talk between them. Lifting one handset automatically started the other ringing, and cradling both devices resets it.

Applications were the obvious “batphone” intercom between two locations, whether those be neighbours down a country road, or from the main house to the granny-flat. Service people could use it to test and repair telephones, telephone collectors used it to make static displays more interactive, and it saw use on stage and screen where a phone was required to ring on set. In a corporate environment it could be used to couple two phone systems or telephony gateway devices that only had FXO interfaces, or turn an FXO port into an FXS one. I’ve used it personally to make a “phone call” between my modem and our home burglar alarm, allowing me to reprogram the latter from within the building.

With the PCB long out of “print” [RIP Bob Barnes] I was contacted by Ross Herbert in Perth last year, with the upshot being these two old Telecom technicians spent the ensuing 18 months redesigning it. Thus OzPLAR came to be.

“OzPLAR” adds a parochial prefix to the acronym for Private Line Automatic Ring-down, which is an industry term for what a circuit like this does. If you’re even older than my 55 years, you might also be familiar with the term “QD relay set”, another equivalent from a generation or two prior.

In a deliberate move to anchor the updated analog intercom to its period in history, there’s no microcontroller here. The logic is implemented entirely in 4000-series CMOS ICs, and eschews tiny surface-mount components. 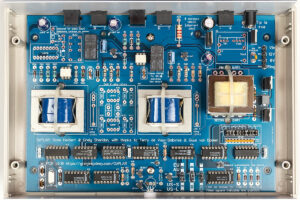 Improvements over the original design are many, although if you compare the two circuits, the original logic engine is largely unchanged.

The original battery feed design has been improved by using two transformers. This improves the audio performance as the higher impedance to speech couples more power to the line and shunts less speech to ground through the supply.

The PCB pattern accommodates the Altronics (AU) M1000, as well as the globally-available Triad TY-305P, TY-306P and TY-400P. The Altronics M1010 and Tamura TTC143-LB are also suitable, but will need to be mounted up-side down on the board via a cable tie and wired with flying leads.

The 8-pin Lucent LB1011 solid-state battery feed IC is long obsolete, but good stocks are still available online. Built in this variant the OzPLAR could be built for $30-50 cheaper than equivalent iron-core components, and with superior performance into disparate lines as each telephone gains its own self-contained battery feed. Read more about that on the ‘customisation’ page.

By default OzPLAR accepts a 24V DC input, and this rail directly powers the battery feed. Whilst analog telephony traditionally uses 48V, NEC PABX’s and Telecom Australia’s (Telstra) intercoms such as the Intercom System 1 + 2 have used 24V going back more than 50 years without compromising performance, and we’ve adopted this same model.

A switch-mode regulator steps the 24V down internally to provide a 12V rail for the CMOS logic and the ringing inverter. Current drawn from the 12V supply is generally negligible, peaking only when a phone is ringing, however this precluded the user of a linear 7812 regulator (although with some heatsinking you’ll probably get away with it). The 7812 has internal over-temperature protection and will simply shutdown if it gets too hot. Switch-mode 7812 equivalents won’t require a heatsink.

If you’re building for 48V DC operation you can omit the 12V regulator and replace it with either a MeanWell SKMW06G-12 (Mouser) or Traco TMR 6-4812 (Digi-Key). These modules have a much higher headroom than the 7812, accepting up to a 75V DC input. 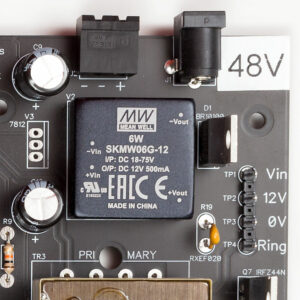 We’ve designed the circuit and PCB to accommodate components from all the large component suppliers, including Digi-Key, Element14/Farnell, Mouser and RS, as well as Altronics here in Australia.

The cost to build the OzPLAR will vary depending on where you are and the version of battery feed you choose to implement.

Our estimates for the component costs (including PCB and enclosure, but excluding the 24V supply & 3D panels) run to around $AUD150, approx. $USD110 and EUR92. There’s some variation here depending on the battery feed transformer chosen/available to you. Further savings can be made by omitting some components (like the duplicated telephone and power sockets), and if you’re hard-wiring for Euro or one of the US cadences, you can omit the 4078, a 1N914, the resistor network and related headers. A table of optional components will be published in due course.

The PCB, circuit and full documentation are in the October 2021 issue of Silicon Chip magazine. Silicon Chip is also selling the PCB.

The artwork for the custom 3D printed panels can be found on Thingiverse. There are separate .stl & .3mf files for Altronics and PacTec enclosures, with your choice of 24V and 48V voltage rating labels.

Ross and I collaborated on the design, with my partner OzRocky providing the 3D prints for the PacTec case panels.

OzPlar incorporates a variation on the 20Hz ringer from Terry de Vaux-Balbirnie’s “Phone Ring & Test” circuit, published in Everyday Practical Electronics magazine in June 2006. We thank Guus van Baalen for sharing his updated circuit with us.