New to the Sonus SBC 1000 and SBC 2000 is the ability to perform a Partial Import of another gateway’s configuration. As it says on-screen “Existing Logical Interfaces, Ethernet Ports, VLANs, MST Instances, ACLs, Static Routes, ASM Networking, Link Monitor, NAT, IPsec Tunnels, Node-Level Settings and Certificate configurations won’t be modified. All other configurations will be over written.”

This is a fantastic way to ‘clone’ an existing gateway or perhaps start every build from a standardised template-style config, but you might find it’s not always going to be 100% successful for you.

I recently encountered a customer who has an existing SBC 1000 and has bought a second for their DR DC, but alas our attempt to blow the first one’s config into the new one failed: 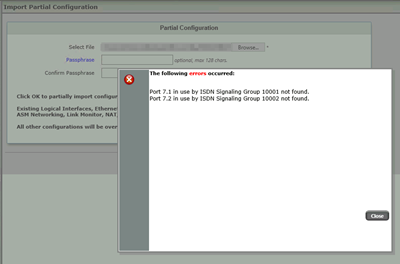 The issue is that the ‘donor’ or ‘source’ system has ISDN cards in it, which the new one does not. I think a lot of customers are going to encounter a situation like this as they migrate from ISDN to SIP Trunking, but thankfully it’s relatively easy to get around.

There are two options, and the path you choose will probably be dictated by whether you have another SBC of the same model (a third) that also has ISDN cards in it.

We just need to get the ISDN signaling groups out of the config and then create a backup.

Schedule some downtime. 10 or 15 minutes should do it, and most of that will be spent twiddling your thumbs.

You have a spare?

Easy – provided (as I said above) your spare/Lab/demo gateway has ISDN cards.

If the current config in this third gateway is important to you, back it up.

The rest of the process is much the same as above:

Now’s probably a great time to download my ‘uxbuilder’ script so you can turn these backup files into more legible Word documents and PDFs:
https://greiginsydney.com/uxbuilder/

BTW, the above is accurate as at 4.1.0 b369. Sonus is aware of this and we’ll hopefully have this behaviour improved in a future release.

Updated 7th March 2015: The Sonus TAC says this operation is design intent. A PI has been raised on the subject.