This update resolves the following issues:

Whilst not directly identified, this update also appears to stop the unexpected ‘ding’ when you type ‘]’ into an IM.

No new functionality appears to have been added since the recent Security update.

BTW, just in case you’ve been hiding under a rock of late, know that this update and its pre-req’s ALSO includes the Skype for Business client interface. Released last month this makes a range of changes including new sounds and program naming, as well as the optional Skype UI. All future updates to the Lync 2013 client are going to incorporate this functionality, just as each update includes all previously released fixes. I’ve covered it here.

After you install this update, you may experience the issues that are described in the following Microsoft Knowledge Base articles:

A few people have found their recent updates haven’t delivered as expected. Don’t forget *all* of the pre-req’s. The Office 2013 SP1 requirement still applies if you’re using Office 2010. (Lync 2013 in all of its flavours – e.g. Lync Basic – is still a component of Office 2013).

I’m still using Tom’s great Hotfix installer. I threw all of the pre-req’s in a folder (even though I’m already patched as per NOTE2) largely to see what would happen. As per NOTE1 though, you “must” have Office 2013 SP1 installed before you start. 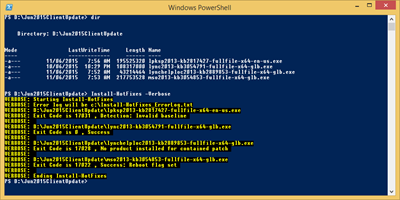 Nothing popped to say yes, but as the Office update wanted one apparently (in the image above) I gave it one.