I have a couple of Polycom CX600s living in common areas. Each is logged-in permanently as a (dummy) user and not tethered to a PC. They’re effectively serving as common-area phones, but setup as real users. I’ve updated my Lync to the CU1 and CU2 updates to the phones (.107 and .250 respectively) as per my earlier post on the subject, and on each occurrence found that the phones fail to apply the updates seamlessly. My old Tanjay went to .250 without issue, but the CX600s – different story.

Each found and applied the update, but then gets stuck trying to login afterwards. After CU1 I needed to tether them to a PC & “Erase All User-Created Data” (power-up with * & # pressed) in order to get them to login. Once done, the PC was disconnected and everything was a source of joy. Until CU2, when I found myself in the same scenario again: 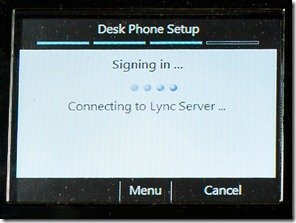 If you refer to the Release Notes from the RTM documentation (Lync_Server_2010_Clients_RTM_Relnotes.htm) it suggested this configuration was going to be an issue at the time, and I’m wondering if this problem is ongoing:

PIN-based authentication requires the user to enter the telephone number or extension and PIN on the phone. The phone then issues a  “DHCP Options 120” query to determine the Lync Server 2010 pool FQDN to connect to. However, the pool FQDN must match the user’s SIP domain for security purposes. Also, this mechanism will work only for one SIP domain in the current release.

There currently is no workaround for this issue.

I’ve asked Polycom if they’re aware of any issues with this, and am awaiting their response. If your deployment has different SIP and network domains, you might want to be cautious about updating the phones…

UPDATE 16th May: Jeff Schertz is quoted in a comment on this blog post as saying “Microsoft has an open PSS case right now related to some phones getting stuck at the sign-in process after being updated to the CU1 4.0.7577.107 release”. So perhaps it’s not just me. (Phew).