Out of the box (and included free with every Lync!) is lots of functionality that you can turn on and off on a per queue – or in Lync parlance, “workflow” – basis, including time-of-day, day-of-week & public holiday opening hours, recorded announcements, text-to-speech messages and even a multi-level speech-reco(!) IVR / auto-attendant / voice menu. There are also overflows based upon time in queue or number of callers – but I think you get the idea.

One of the Response Group’s shortcomings is the real-time visibility is “poor”, as is the historical reporting: the latter being limited to either 1 (or possibly 2) canned reports. I guess that Microsoft focussed on call handling – getting the calls to the agents, using an in-built queuing engine – and left “others” to add extra value on the user’s desktop.

This is where Aussie software developer AdvaTel has stepped in and released “Espera” [Spanish for ’waiting’].

Espera is a client & server app combo. The server-side resides on a server configured in the Lync Topology as a trusted application server, reading RGS data directly from Lync’s databases. It then cleverly sends this information to the client-side app through a permanently-established IM conversation. (More on that later).

There are two flavours of Espera: Real Time, and the new Reporter add-on.

Espera Real Time has been around for a while now. It provides a very familiar on-screen call centre “wallboard” or “agentboard”. Customise the view for each agent or team, set the colours to change when thresholds are exceeded, re-size it (from vast to tiny), etc.

I like that you can hover over a particular field on the screen and a pop-up will give you more information:

In the above image I’ve hovered over the “Agents Logged in” and it tells me Greig’s logged in – but he’s busy. (The brown border is courtesy of Windows 8 BTW).

The supervisor or administrator can also broadcast messages to the wallboard of just one agent, or to a group.

The wallboard can be docked to either the top or bottom of the screen and it won’t be over-written by any other application when they’re maximised, ensuring the wall-board’s status and its messages are always visible.

Another great feature in Espera is that it lets agents in Formal response groups log in and out at the press of a button – sparing them the tedious trip to the Response Group Settings web-page. (Those are the two “key” buttons in the Espera “side bar” below). 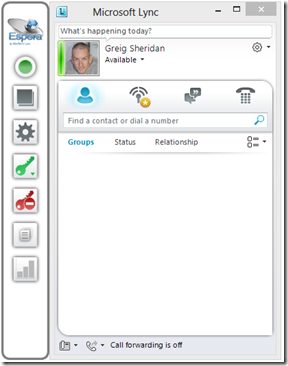 With the latest build the side bar becomes optional: just right-click the tray icon to show or hide it as required.

And of course anyone can run Espera – you don’t need to belong to a queue to see how it’s performing.

Reporter is the latest addition, and they’ve clearly been busy back-of-house, in some cases calculating custom reporting fields to fill in some of the gaps in the information captured by Lync.

Features of Reporter include:

Espera very cleverly communicates between the client PCs and the server app using a hidden IM that’s always established. This makes it VERY easy to install – you don’t need to punch any holes in any firewalls, and it just works – even if you’re remote. (So much for the mice being able to play while the cat’s away!!)

Some users might however “see” this hidden conversation and find it annoying. It’ll reveal itself if you try to exit Lync, popping the “Signing out of Lync will end all calls and conversations on this computer…” message when you don’t seem to have any open. (So check “Do not show this message again”!). It’ll also show if you’re announcing calls before you transfer them, using the “transfer to current conversation” process: 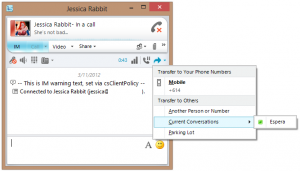 It’s also visible in your Conversation History folder too.

The fix is simple enough: AdvaTel’s included an alternate TCP communication path that prevents either of the above messages popping. The downside is of course that you might need to add some extra firewall rules.

I think AdvaTel’s found themselves a great niche here. Rather than inventing a new routing engine of their own (like Geomant, prairieFyre and others have done), they’ve strategically left the heavy lifting to Microsoft, all still taking place inside Lync, and added the client-side and supervisory / administrative interface that the RGS lacks.

Some of the Reporter output is a bit buggy – but I’m playing with a Beta build. (The GA release will be out soon).

At the moment it doesn’t report calls at the Workflow level (only after they’ve dropped through to a queue), so you might need to reorganise your call flow structure to maximise the reporting benefit. It is hoped that Workflow reports will be added in a future update.

The client works on XP, 7 and my x64 Windows 8 machine, so they seem to have nailed that. Support for Lync 2013 is coming too…

Its requirements aren’t high and my customers to date have found it very favourably priced. It installs in next to no time, the installation PDF is very detailed, and AdvaTel also provides an assisted installation option.

AdvaTel kindly provided me with a licence for Espera. You can download a demo version from their website, and if you’re still wanting to try before you buy, they even have time-bombed trial licence keys.

If you have a spare 3 minutes, there’s a great demo on YouTube.