I’ve spent a lot of time this year working with the <verb>-CsUserData commandlets in SfB, and it’s been an interesting time.

This is part 1 in a series where I document the traps I’ve fallen into with the Import-CsUserData and Update-CsUserData commands in particular.

My customer is a LARGE deployment, and they’re moving from Lync 2010 in a user forest to SfB 2015 in a resource forest. In an effort to make this transition as seamless as possible for the users, the plan is to migrate all their contacts (their “buddies”) from the existing platform to the new.

The approach we’ve taken breaks the process into multiple steps:

This series will document those bugs and hopefully prevent others from earning the same scars.

I hit this error recently trying to use Update-CsUserData to import a user’s contacts:

This struck me as odd, as “Update-CsUserData -TestMode” had run fine just prior:

I was using the .ZIP version of the user’s contacts file, and I know SfB is OK importing the .XML, so I tried that as well. No dice – same error. 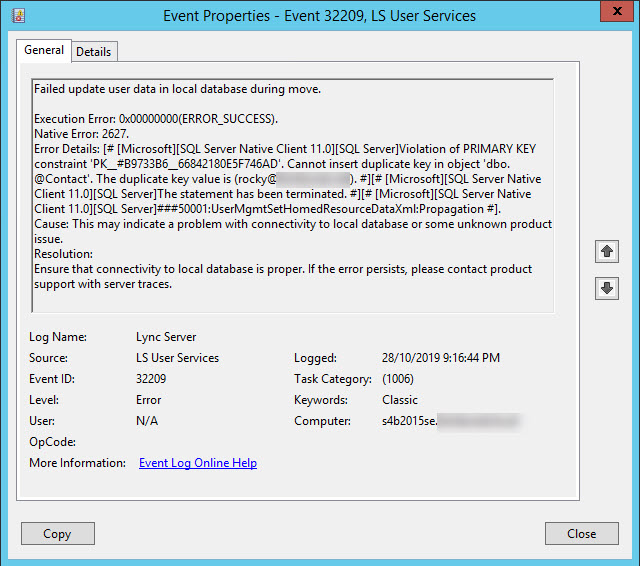 “Cannot insert duplicate key in object ‘dbo.@Contact'” and a SIP address was all the prompting I needed to go hunting in the user’s buddy list XML file, and what I saw struck me as odd:

Rocky’s not meant to be there twice! In his first appearance he’s a member of only group 1, and yet he reappears later as a member of Groups 1 and 2!

The fix was some hand-editing, removing the unwanted dupe (the first record). A quick repeat of the Update-CsUserData commandlet against the edited file completed OK.

Lesson learnt: you can’t rely on Update’s -TestMode to find it if it’s not.

Confession: this issue wasn’t caused by Lync 2010 exporting bad data – it was all of my own doing. I had scripted a SIP domain change of some buddies in the export/import process, and this resulted in the odd accidental dupe.

(*) In this Lab reproduction of the issue, the event was on the user’s home FE, a standard edition server, and not on the SE FE from which I was issuing the commands. In an Enterprise Edition deployment I can’t say for sure where the event will land. Will it be on a random FE in their pool, or will it be on the user’s Primary server?

28th October 2019: This is the initial publication.
31st May 2020: Corrected the false accusation against Lync 2010 and added my confession.