With two USB peripherals in the market providing an external LED that mimics your Lync presence status, I thought it’d be good to compare the two.

First off: the disclaimer. My employer [when I wrote this review in 2013] is the supplier of the Blynclight. It’s always difficult to write a completely fair and impartial review in this circumstance. The usual outcome is that you’re unnecessarily harsh on your “own” product so as to offset any unintended or perceived bias. Feel free to comment below if you feel I’ve done either product wrong or overlooked a feature. 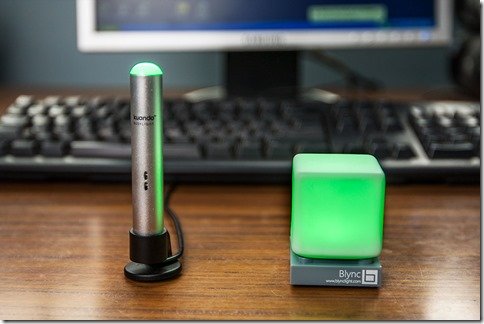 The Busylight is a small aluminium tube on a swivelling base that permits it to sit adjacent, on top of, or attached to the side of your monitor (or cube). It ships with a piece of double-sided tape to help fix it in position. At the top of the rube is a small opaque dome that lights to show your presence status. Internally, a small piezo speaker can play one of a selection of tunes to indicate an incoming call. Halfway up the tube on one face are two small slots that permit the sound to escape.

The colour rendering is good, and the light should be visible enough for most office environments. I like that it’s possible to tweak the colours (more on that later), but can also see some of the utility being lost if users take some personal liberties with the colours, particularly the colour that indicates you’re on a call. If you don’t want or need the 180-degree light distribution, a reflector will further increase its visibility.

It was a brilliant move of Kuando to include an internal speaker for a ringing sound. I’ve deployed Lync to several customers where we’ve needed to provide some users with a separate USB speaker so they’ll receive an audible indication of an incoming call. Then again, if the LED’s flashing, is a speaker all that necessary? It’s perhaps due to the physical constraints that the speaker isn’t particularly loud, which might render this feature mostly futile anywhere but a fairly sedate office environment. Note that the speaker isn’t a USB sound device, so it’s not apparent to Windows and doesn’t show as an option for (for example) Lync’s “Secondary Ringer”. I took this as a positive, as it’s one less sound driver to have to worry about, or device to be accidentally selecting to listen to your voicemails.

In preparing this review I tested the Busylight on four machines: two Windows 8 PCs and two old Dell GX-260s running XP. Three were running Lync 2010, while one of the Win 8 machines also had 2013 Basic & my own Lync utils installed. With early drivers I had a few problems (it wouldn’t work on the first Dell at all), but I’m pleased to say that the current version of driver (1.0.0.141) works well. At worse, you’ll need a reboot after the install.

On my Win 8 machine I’m also seeing an annoying ‘flicker’ in the LED. Every so often (45s – 2+1/2 mins) the LED will extinguish ever so briefly and then re-light. I find this quite distracting, but don’t know if it’s localised to my machine, or a more wide-ranging problem. Is it Windows, something to do with the USB driver on my Gigabyte motherboard, or a watchdog timer resetting the hardware? (It doesn’t happen on the 3 other test machines).

The manufacturer has advised that a v2 of the driver is not far off, bringing with it some new functionality as well as the usual increased robustness. New in v2 will be the ability to set it to only glow red when you’re on a phone call (as distinct from when you’re in a meeting), purple when in DND, as well as mass deployment configurability.

The Blynclight is a soft plastic opaque cube sitting atop a grey plastic base. The entire cube lights to display your presence, and with 5 high-intensity multi-colour LEDs inside, it certainly has some throw. The colours are bright and highly visible, although the yellow can sometimes look mottled, having been not evenly colour-mixed through the opaque plastic cube.

A weight in the base of the Blynclight helps keep it stable on a desk, and a piece of double-sided tape included in the neat package lets you stick it in place (although you might need to remove the rubber feet first).

The Blynclight introduces purple to the Lync colour palate to help people discern between Busy and DND, purple indicating the latter.

I like the two optional settings in the tray app: Flash on incoming call, and Busy on phone only. The latter setting means that the LED won’t show Red when your calendar reports you’re in a meeting, only when you’re actually on a call: 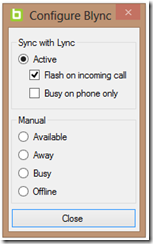 Manual mode is useful for those outside of a Lync environment who want to run their own USB-powered traffic light, although for those users it might have made more sense to name the colours rather than their Lync equivalents.

Hackers will be quick to find that the plastic cube can be easily prised from its base, and you can substitute your favourite kids nightlight or Movie Tie-in Happy Meal toy with negligible box-knife surgery and a hot glue gun.

In my tests it performed well on all 4 machines, although I needed to reboot the XP machines after installing the driver. My biggest gripe with it is that when I bounce between Lync 2010 and Lync 2013 I need to manually wake it up from the tray each time I launch Lync – although I understand this is on the “fix list” for the next driver update.

Both share many common features. I’ve provided a table underneath to make for an easy comparison of the differences.

Features common to both include:

The benefits of a more visible status LED are great, especially for those of us in open office areas wearing a headset. It must be noted that the first of these you deploy will attract unwanted attention, resulting in people inevitably coming up to you asking what the red or purple light means. (“It means Do Not Disturb – now go away!!!”)

My partner has suggested the comparison between the two devices is very much Mac vs PC: the Busylight is sleek and pretty in brushed aluminium but with a more subtle lamp, whilst the Blynclight, due to its physical size is a lot more obvious on the desk, functional without bells and whistles.

I think the drivers are the weakest component of both, and of course they’re also the easiest to improve and enhance. Both vendors are helpful and welcoming of feedback. Each has driver updates in the wings, so some of the rough edges I’ve reported above are sure to be smoothed soon enough.

Both perform their relatively simple task admirably. Which you choose probably comes down to how you weigh three primary factors:

The Blynclight is currently only available through its website, and sells in single quantities for US$35, with an additional US$12 for flat-rate shipping.

The Busylight is available through resellers. Mine came from their Australian reseller and cost me a total of AU$93.50 delivered.