This one contains a solo update:

You might think this update hasn’t worked, but it’s just not playing by the usual rules.

Help / About doesn’t show it and it’s not revealing itself to Get-CsConnections either.

It is however all good – it’s just only updated the Browser Helper Add-on – and you’ll find it in IE / Settings / Manage add-ons. (See below).

I have all the pre-req’s already installed, so a reboot was not required. 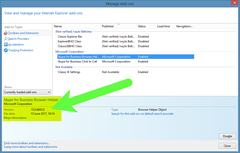