I’ve long enjoyed tinkering with electronics, although it’s something I don’t do a lot of these days. I find that I simply no longer have the time to invest in designing, prototyping & debugging, then the PCB design, layout, artwork and production.

Home is littered with all sorts of home-brew projects, including the old stereo matrix switcher (with an Elektor input board and my own output stages and PIC control); a discarded poker machine turned into a piggy bank (PIC); a PIC-based driver board for the chimes from an old pinball machine; and the list goes on.

One project I’m particularly proud of is my Telephone Intercom. This was one of the few circuits I had published in Silicon Chip magazine back in the 90s. You can still buy a copy of the article from their website (refer May 1992) if you want to read more about it and Bob Barnes at RCS Radio still has the circuit boards for you to build your own.

As well as being a practical intercom for calling from Point A to Point B, or just for testing a phone works, it’s also seen use in theatrical environments to make a phone on stage ring on cue. 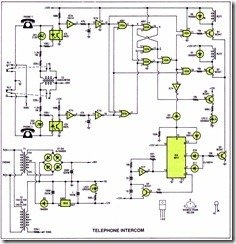 The circuit is pretty simple: it uses a standard 600:600 ohm transformer as a “Stone” transmission bridge to couple the phones together and four CMOS chips provide the necessary logic and ringing control.

The power supply is provided by a pair of small PCB-mounting transformers to give a 46V DC rail with an AC ringing signal superimposed over the top as required. (You need the ring on top of the DC so it can detect when you answer the phone).

The ringing cadence can be customised by adjusting the clock rate into the 4017 and selecting the appropriate outputs, OR’d together with diodes as necessary. To generate a standard Aussie ring cadence (400ms on, 200ms off, 400ms on, 2s off) I set the clock to 2.5Hz (T=400ms), and sent output 2 (pin “4”) to Q4 to give the oscillator a “hurry up”, momentarily doubling the speed for the one short (200ms) pause between ring bursts. 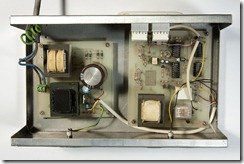 Scarily, I’ve just realised that the prototype (as published) will be 20 years old next year, and whilst it’s a little dusty and dinged, it still works well. You’ve gotta love old-tech. No buggy firmware to worry about here!

… and thanks to Leo Simpson at Silicon Chip for the permission to reprint the circuit from the magazine [and Rocky for the photos and scan].