It’s been over 6 years years since I published two how-to guides on ways to interface your (then) on-premises Lync deployment to a public address / paging system:

Given the Cloud-based architecture of Office 365 and Microsoft Teams I thought I should revisit the subject, see if they’re still relevant, and if there are any superior ways of doing same.

I’m pleased to say that both remain relevant in a cloud-based deployment, although they require a CCE or Microsoft Teams Direct Routing (DR) SBC in order to add the required FXO port or SIP connectivity.

OK, so that’s not everyone these days. What alternatives do we have?

If you’re using Microsoft Teams without DR, or SfB with Microsoft’s Phone System you won’t be able to use the interfaces described in those previous posts, but thankfully there’s a way to do this using a Polycom VVX. The trick is the combination of a cable that will join the phone and the PA, and a special config file that enables the phone’s “auto-answer” feature.

Here’s the test rig I used in my Lab – a VVX410 with the referenced cable adapter, plugged into a cheap set of USB speakers, simulating the PA system. If you only want to broadcast to a room (workshop, lunchroom etc?) then just substitute a more grunty set of USB speakers and you’re done! 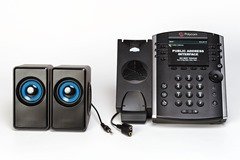 One of the dangers of hooking a phone to your PA system is that anyone can just call the phone. Needless to say, this gets MIGHTY risky if you’ve deliberately or otherwise given the phone a number in your indial range. THAT’S not something you’re going to want a malicious ex-employee knowing!

The primary ways to shield it from external access are to EV-disable the account / leave it without a Phone System licence / don’t assign a LineURI.

Adding some security through obscurity is always a good idea too, so if you can, hide the account from the Address Book.

To lock the account down so only authorised parties can initiate a page, you need to leave the phone permanently in Do Not Disturb. Here’s how-to, depending on your platform:

Unfortunately Microsoft Teams isn’t honouring DND here at the moment. I don’t know if that’s a bug or a problem due to the phone being signed-in through the SfB gateway (the VVX not being a native Microsoft Teams device). I also see there are several UserVoice requests around issues with DND, so I suspect it’s still being worked on.

I’ll update here when/if that changes, and if anyone can shed any light on this, please leave a comment below. 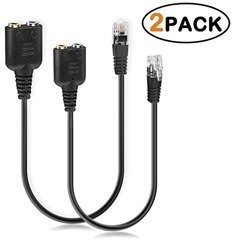 The VVX config file referenced in this article is in my master VVX repo at GitHub.

This contains a few tweaks to my usual config, some of which are: