“Crystal-clear audio conferencing for your computer”

I recently found myself in possession of a Beta version of the new Polycom SoundStation Connect and an opportunity to put it through its paces.

I managed to break it (always a self-gratifying feeling, even if unfair against a Beta version – a firmware update has since deprived me of that pleasure), but not before falling in love with its look and sound.

Functionally, think of it as an upgraded version of the CX100, so it’s going to work with any UC soft-phone application. It has HD audio performance (a frequency range from 200Hz to 7kHz), and three internal microphones giving a full 360-degree pickup. 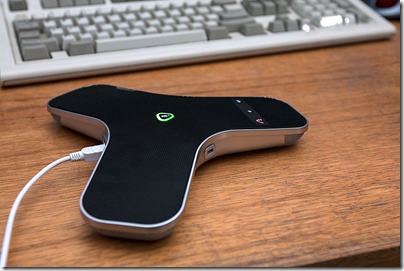 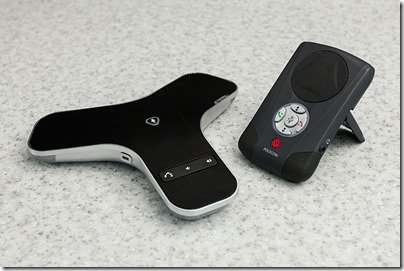 I tried the Connect in two test environments: the first, a quiet environment more typical of your average office; and the second in the noisy confines of the techy dungeon home to greiginsydney. For both I made test calls to/from a CX600 in the next room. We predictably ended up with the RTA-WB (x-msrta / 16000) codec, so we enjoyed “wideband” / “hi def” audio.

As expected, the Connect’s audio performance was flawless here. The local user’s voice was correctly detected from ~2m away, and the incoming voice was always loud enough. If we both spoke at the same time there was a gentle ‘gating’ effect that ducked the volume of the remote party a little, but not to the point that it impaired my ability to hear them.

In my “office” I have a pair of servers constantly whining, and a resulting ambient sound level of ~65dB. The Connect handled this difficult environment really well. When I wasn’t speaking the remote party couldn’t hear the servers, so it was correctly ignoring and muting this constant background noise – presumably the result of the “audio enhancements” referenced in the Datasheet. For my test calls to the CX600 in the next room the conversation always sounded natural. The remote party also had no difficulty “breaking through” my relatively high ambient sound level when they spoke – a challenge that would render a lesser handsfree device useless.

I found the Mute button quite difficult to toggle. I eventually realised that a precise press to the button was LEAST likely to register, and that it needed a more casual slap, with my skin needing to come into contact with the surrounding metal grille before it would register. It’s a capacitive sensor, but so are the answer/hangup and volume buttons, which never failed to register. I’m guessing the illuminated surround to the Mute button obstructs its functioning, which is a shame, because it’s a quite good look. I can see this as a weakness that I wouldn’t expect a firmware update alone will correct. I guess time will tell.

I know this isn’t going to show me in the highest possible light, but I learnt something new and fascinating when testing the Connect. As it turns out, if you’re busy, not paying sufficient attention, multi-tasking and otherwise making excuses, you’re going to find that a Mini USB plug fits snugly into the Kensington lock slot on the side. And I tell you now that if *I’m* dumb enough to do this, you’re going to receive plenty of “it’s dead” calls to the HelpDesk! Given that the web has many posts and videos on how easily you can bypass the barrel locks on most locking chains, I think a sticker over the hole is probably the most practical solution.

At the moment Lync shows the icon for a CX100, which will prove confusing to some users until such time as it’s corrected. 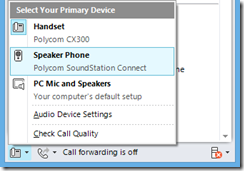 (My address book has since updated – thanks for noticing).

I initially tested a Beta version of the unit, and I found that if an attempt to join a conference failed, the Connect would lockup, playing a broken dial-tone. A zero-current reset was required to fix that. I also noted that as the “Power-Up” tune fades out it sounds scratchy, like it’s been poorly sampled, or is playing back at a different rate. It’s a tiny thing, but I expected better of Polycom!

The lockup issue has been resolved with a firmware refresh and the sampling crackle also largely dealt with.

If you ever upgraded a RoundTable, you’ll LOVE how easy they’ve made it to upgrade the firmware on the Connect: you just drag the file to it in its alter ego as a removable drive. Here’s the process, just in case you can’t find it anywhere:

Seek and ye shall find: it does have a diagnostics mode.

The Connect delivers the legendary full-duplex handsfree performance expected of anything bearing the Polycom brand. It shares the design look and feel with its stable-mates, is SUPER-sexy, light and portable, and priced to compete with the market’s other offerings from Jabra and Plantronics. (Reports indicate a US RRP of $300). Your biggest risk may yet be theft, so perhaps you need that Kensington port after all. Just don’t confuse it for the USB mini socket.

This is its page @ Polycom, here’s its datasheet, and this is an FAQ PDF.