Occasionally someone will be brave enough to ask why I give my sexuality top billing in my Twitter profile and bios: 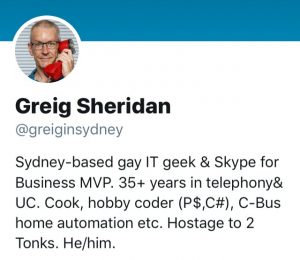 It probably seems a little out of place given that if you search the word “gay” on my blog you’ll find the only hit – singular – is on my “about” page (until now that is).

That I’m gay isn’t relevant to what I do for a crust – no questions about that.

While society has come a long way since I was a kid, those of us who aren’t heterosexual or have a non-binary gender identity still attract plenty of negative media coverage – just for being different. Positive role models for people coming to terms with their sexuality or gender seem few and far between, and if you’re closeted you’ll probably find positive reinforcement is often in short supply.

So my being up-front about my sexuality is just in case you don’t think you know anyone who’s gay – you do.

I’m not saying I am – nor want to be – a poster-boy for middle-aged gay IT professionals, I just happen to be one of the many of us out there.

My sexuality and gender identity are a core part of who I am, but I long for the day that it’s something people don’t need to think about or be concerned by. It’s happening ever so slowly, and I think every LGBTQIA+ person who’s able to be more visible in their day-to-day lives helps this progress.

In Australia, QLife provides anonymous and free LGBTI peer support and referral for people in Australia wanting to talk about sexuality, identity, gender, bodies, feelings or relationships. They’re on the phones from 3pm until midnight every day (AEST).