There are a handful of fixes, as well as some new values added to var_config.

Here’s an extract of the latest changes from the Readme document, which you can Download.

The E&M Caller ID feature implemented by MR 4923 worked in Receive Direction only. When the Tenor made outgoing calls, it sent only DNIS, independent of configuration. This has been resolved.

When MR 4923 (E&M Caller ID feature) was added to the Tenor DX, it caused the Tenor Configuration Manager to not connect with the Analog Tenors. As a work around, enable the feature changes in the CLI database for Digital Tenor only, not Analog.

When the Tenor decoded the CallID header and found a % character present, it would interpret the character (rather than taking it as a literal character). As a result, the Decode failed. This has been resolved.

Some T1/ISDN carriers do not provide an ISDN level connect message for 911 calls. As a result, the Tenor never sent a 200Ok message to the SIP side to connect the call. A new feature enables you to configure up to 8 phone numbers for mapping of ISDN Progress to SIP connect. Each phone number handles a maximum of 16 digits. This feature is applicable only for calls coming into SIP and out ISDN (Trunk/ISDN). The DN specified is used to match against the final translated DN (not the original incoming DN) that is sent out on the DN side.

A new varconfig file is available to support this feature: mapIsdnProgressToSipConnectDN1 DN1 (where DN1 indicates the DN number).

If the Tenor was configured for IP to IP calls and if the originating IP device/phone had any codecs in its profile that the Tenor’s DSP did not support, the incoming SIP invite caused the Tenor to crash and reboot. This has been resolved.

4923 Calling Party Number (Caller ID) support in CAS E&M
Although the current CAS E&M implementation does not support receiving and sending of ANI (calling party number), new configuration options are included for E&M to support a modified DNIS that includes ANI.
To support this feature, the following new configuration items are available for the CLI only (not available in the Tenor Configuration Manager) under CASSG-1:

For detailed information about the commands, see the Command Reference Guide.

When a call was made from a Lync Mediation Server, a user would receive three quick beeps when making any outbound call from the Tenor DX before the user on the Lync client side heard any ring back. This has been resolved.

When a Tenor was making an outbound fax call through a SIP Trunk, and a T.38 in the INVITE was returned, the Tenor chose G.711ulaw instead of T.38 and the fax subsequently failed. The Tenor was unable to re-negotiate media when it received a ReInvite that put the Tenor on hold. A new var_config item is now available that configures the Tenor to accept and negotiate media change on a ReInvite even if it indicates Hold.

To enable a Tenor to negotiate for a ReInvite that puts the Tenor on hold, a new varconfig configuration option is added: sipNegotiateMediaOnHold.

Under certain conditions the Tenor would attempt to collect ANI more than once, causing an R2 call to fail. This has been resolved.

I’ve always found the DOS process the easiest way to upgrade these, and it remains unchanged for this release: 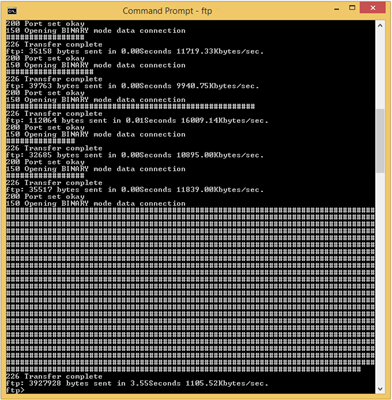 Done! After the box has rebooted, telnet to it and “show –v“ to confirm the new version. (You did back it up first, didn’t you?? “show –l”). 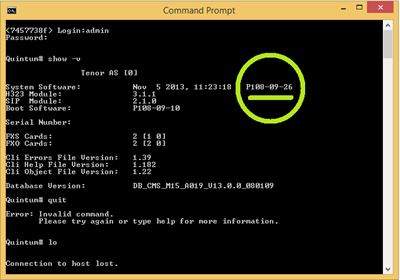